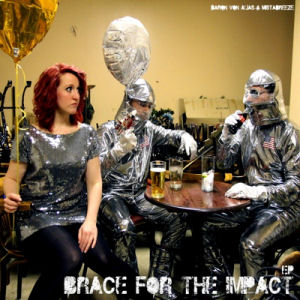 It's not the easiest task in the world for a U.K. rapper to develop a reputation in the U.S., but Baron Von Alias has succeeded beyond even his own expectations. Starting with "Timepiece" in 2009 and continuing on collaborations with Arhat and MistaBreeze, he's become known for his strong flow and intentionally cheesy fake mustache

By steadily introducing new material through his personal Bandcamp site he's stayed on the minds of hip-hop heads. In fact this latest release "Brace for the Impact" is free on Bandcamp for EXACTLY one week, so if you want to download it now would be a good time. Most of Baron's tracks to date have had what I would call a "traditional" hip-hop presentation, like one of my personal favorites - "Outside In" from "The Great & The Magnificent." Check it out below.

In reviewing that album staffer Emanuel Wallace said something unintentionally prophetic about Baron's future work. In describing the song "Can't Get Enough" he notes "it may do well in the dance clubs, but it seems to be somewhat out of place on this album." Much like everyone's favorite hip-hop supervillain MF Doom, when you wear a disguise for long enough you can get away with transforming yourself into any alternate hip-hop identity or persona you see fit. (Come to think of it Baron does remind me of a cartoon villain - the infamous Snidely Whiplash.) In this case Baron took the "dance club" idea seriously, so "Brace for the Impact" ranks highly among apropos album titles. Putting aside the 47 second title track, which serves as an introduction and nothing more, this ENTIRE EP sounds as though it were made for an energetic late night discothčque. The easiest of these songs to understand is "Impact" with Eliza Lawson:

"From another planet, I'm just lightning in the sky
But think of the damage I create when I collide
[...] Out of this world, in and out of your girls
From the mouth with the words never heard this creepy
I believe these species fear me
Yeah, yee, you think I'm freaky
[...] Biding my time until I attack
(Seconds to impact)"

Okay - he's an outerspace invader who wants to find out if Earth girls are easy. I think we can all grok that, and the rap verses themselves are fine, but MistaBreeze creates an ear piercing noise on the chorus that sounds like a industrial hip-hop power drill fed through an amplifier. I don't dig it. "Step in the Room" starts out better as MistaBreeze gives some crunchy guitars to Baron while he's rapping, but once again the chorus kills things with a high pitched nails-on-the-blackboard screech that just keeps repeating. Normally I'd agree with Baron Von Alias when he says "eff you critics and cynics" on a song, but that headache inducing noise just makes me want to say "eff you" right back.

"Light Years" featuring Rossi Noise is the best of what this EP has to offer, opening with a soundscape not unlike one of Mega Ran's tracks remixing a Capcom classic, then modulating it in a (mostly) pleasant way. The problem is that on "Throw Your Body" we're back at the Euro disco again. The finale "Do Your Worst" is in fact the worst offender of all - a track that sounds more like it belongs in the trailer for "Red Tails" than on a rap album. I realize Baron Von Alias likes to try different things and wear different hats (or mustaches) but this just doesn't work for me. If dance/techno/club music is what you were looking for, "Brace for the Impact" certainly fits the bill, but if you wanted a rapper to get ill over banging beats then you might want to wait until he changes mustaches again.