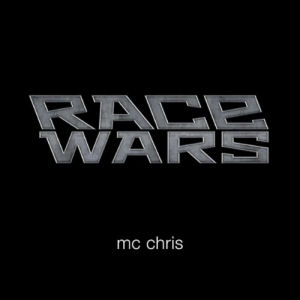 mc chris has been a warrior for nerdy rap fans since the early 2000's - and "warrior needs food badly." That's how he caught my attention back in the day - there weren't many rappers flowing to the sounds of Gauntlet or rapping about Boba Fett from Star Wars driving around the galaxy in a drop-top convertible. He didn't just drop the capitalization of his name, he dropped all the stereotypes of what a rap artist is supposed to be: tough, streetwise, aggressive, and cutting edge cool. As an example here's mc chris talking about HARRY POTTER in concert.

While his fan base has grown considerably since those early days, thanks in no small part to exposure on [adult swim], his "Race Wars" shows he's staying true to his dorky roots. "Nerd Cave" is the quintessential hip-to-be-square anthem, taking the man cave concept to its nerdiest extreme, leaving a trail of candy bar wrappers and empty bags of weed everywhere in the process:

"I know it's wrong, all day long in a coma
Watchin Troma, eatin powdered donuts
Got a Big Gulp, always sip a soda
Can't get up, even though I am a grown up
I like to read, smoke weed, throw up skit grenades
I got the culdesac cracked, got stickie for days
I got a kid from Mississip', talkin shit in my ear
I'd ask everybody over, but that would be weird
I like HBO shows, Deadwood and The Wire
Got other bunny hornies from portable pyre
Got the Lego 8080's, Lego really like dust
All I ask is do not touch, my series of busts
But still my exhibition is a figment of my vision
When I get itchin, hurts being a magician
When I get tore up or someone's throw up in the kitchen
that's a kitchenette, you can bet that it's bitchin"

Like most mc chris albums "Race Wars" appears to be self-produced, though a lack of liner notes in the download version hamper my ability to confirm this fact. From what I understand though this version may in some respects be preferable though, because CD versions of "Race Wars" did not have any track listing or song names, whereas this does. One song has had at least two names though. chris originally leaked "QT" to promote the release of the album, but after remixing the song to remove some uncleared movie samples, the final version on the album came out as "Tarantino."

"Hated school - a dirt bag with nerd facts
Dropped out - ripped tickets at a jerk shack
I escaped - Manhattan Beach where they rent tapes
Pontificate new wave and its french babes
Extrapolate all day cause I got raves
Talk shop non-stop while I got paid
Wrote a script about Mallory and Mickey
Story's kinda gory, some said sorta sickening
Wrote a rom com 'bout a Elvis quotin creature
Fall in love at a Sonny Chiba triple feature
Stole a hooker from a pimp, stole coke from The Sopranos
Then he sold it to Joel Silver before everything goes blammo
One script in the stack in which I wanted to act
Fuck rejections by readers in one year they'll retract"

As you can see it's a loosely autobiographical narrative about one of Hollywood's most infamous directors. While some of his songs go over the heads of hardcore rap fans, even his most ardent critics would have to admit an entire verse about the stars of "Reservoir Dogs

" is pretty fucking cool. In fact the ironic truth about mc chris in this decade is that being nerdy has actually achieved a cool it never had when I was growing up. Playing video games used to get you beat up by jocks, but now the jocks are playing video games too. Whether mc chris songs work now is less a factor of whether the target audience will understand than ever, given an entire genre of similar "nerdcore" rap artists has risen up around him. It's more about whether or not the production works, and for chris this can range from the charmingly simplistic "Popcorn Frog" to the sophisticated resonating piano chords and layered electronics of his track "On the Road":

"Every year, for about five months
To be very clear, I go out and find funds
How to collect from the many that are particular about their pennies
They won't spend a cent, unless there's perks and the bennys
So I travel in a van that was down by the river
Go out into the land understand I am the giver
Got my quiver full of raps and I'm ready to attack
Brought along some books, in case I don't want to nap
We stay at Super 8's dine at Waffle after hours
I like 'em smothered, fingers covered in biscuit powder
Seldom shower, scare the hoes right out of the lot
All I needs a nap and a bit little pot what you got?
My roadies got a room; falls asleep to slasher flicks
He's likes Jason over Freddy if he ever had to pick
We rent a Dodge Caravan it got stow-and-go seating
The road might sound redundant but it does bear repeating"

Making cartoons and rap albums may pay the bills, but "On the Road" proves being a touring artist is still as unglamorous as ever. chris even admits to using the women's bathroom on tour "because it's always clean," which I'm sure a lot more guys would try to get away with if they were a famous rap star too. (If you don't know why, you've never been at a club for a concert before.) Unfortunately one thing does tend to drag "Race Wars" down, something which happens on almost all mc chris albums, and that's a series of lengthy and tedious skits which are probably REALLY funny if you're stoned and/or dedicated enough of a fan to remember the skits from previous albums (they tend to be incredibly self-referential). On this album they total up to 26:10 of your life that you'll never get back, which actually balloons to 36:10 if you include the intentional 10 minutes of silence at the start of the track "Necronomicon." Subtract the latter out and you go from an album that was 74 minutes long to one that's just under 38, meaning just about HALF of this album is a waste of time.

Despite that glaring deficiency I can still give "Race Wars" high marks because the skits are easy to delete out of your playlist after download, and chris is an incredibly charming and likable guy who is self-effacing to an almost alarming degree. At times you actually want to tell him "you're not nearly as nerdy as you think bro" but that's just part of the shtick you wind up going along with. From the drinking anthem "Where Is My 40" to the weed smoking anthem "Jones" (where he nearly chokes on the smoke) he's actually pretty close to the hip-hop mainstream cliche - but in an incredibly nerd cave dwelling way. His biggest problem is getting everybody else to pay attention.