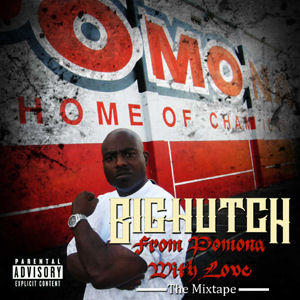 Gregory Hutchinson held tenures at the two most influential rap labels on the West Coast, Ruthless and Death Row. He laid down the blueprint for g-funk. He's been a recording artist for over twenty years, both as a rapper and as a producer. What's left for him to prove? Well, for instance: "Niggas always ask me, can a gangsta nigga flip on some new shit?" Big Hutch (I still call him Cold 187um) attempts to answer that question on his first free mixtape.

"Otis"' soul-dripping beat and Kanye West and Jay-Z's showboating prompt him to turn up the swag as well, to the point where he promises to "update your swag / pull up with a bad bitch every nigga wish he had." And when he taunts, "Bitch, I'm royalty," you may take that as a response to the regal imagery of "Watch the Throne." "I heard they feel me in Paris too," he quips as he revisits another one of that album's songs, renamed to "Bitches Playin' Niggaz."

Rap's other inseparable two, Lil Wayne and Drake, supply Hutch with two beats as well. He puts his foot down on his version of "She Will":

"Ain't the type of nigga you wanna take light
Believe what you heard, I'm more than just a hype
I give a fuck what niggas think or bitches think
Cause I do what I want and haters hate it cause they can't
You in the presence of a real one
Pure 100% raw, never stepped on
Niggas try to act like they more than they ain't
Big wheels, wooden grip - knock-offs with the fake ice
I'm just laughin' out loud while the parade go by
Niggas'll sell they soul just to live fly
But I'm Blind Fury to the bullshit
So jump up on this dick and gobble and swallow it, bitch"

Not trying to be Young Hutch or Lil Hutch, he raps over Run-D.M.C. tracks on "Hutch's House" and "Bubble Up" and pays hommage to his uncle, the late Willie Hutch by looping "Your Love Keeps Liftin' Me Higher" for the mixtape's title track. Closing on a pensive note, he reminisces on happier days and hopes for a brighter future on the Sade-sampling "Cherish It":

"Thinkin' back how it used to be
when a OG was official and respected by a BG
when bitches was cool as hell
and it was all about lookin' out, no matter what status you held
it was cool if you was doin' somethin'
and baby, they put you on blast if you were flossin' or super-stuntin'
when every other nigga wasn't a snitch
when every nigga with paper wasn't tryina captain-save-a-bitch
[...]
Shit, tryina rise up out the ghetto
That's why we stay high when we ride in the ghetto
When black and brown can truly get along
We live in the same conditions, goin' through the same fuckin' drama
Bloods and Crips, a whole lotta killin'
The shit won't ever stop unless we all willin'
When the government give us all a break
and stop fakin' the funk and lyin' to our fuckin' face
Let's come together as one race
Cause in God's eyes we all His children and we all fall to His Grace"

Other than that the main message of "From Pomona With Love" is that Big Hutch is an OG and "hall of famer." Such attempts to reclaim status do carry the risk of making a rapper look desperate. Veterans like Snoop Dogg or Jay-Z have wisely avoided such obvious posturing while still giving off an air of seniority. As for the other, initially mentioned purpose of the tape, to combine an old head with new beats, it's clear that Hutch fares better with the sample-heavy "Otis" than the bare-bone "The Motto" (although it does have the raw bump of certain '90s Above the Law tracks). I can't tell if there are any fully produced, original beats on here (minus the AutoTuning, "No Hustle No Money" could be something from the later Above the Law catalog), other than the collaboration with ALT and Violent J ("Rock the Hate") that confirms his 2011 signing to Psychopathic Records. For future endeavors, Big Hutch is advised to stick to his roots, as he does by rapping over the "Murder Was the Case" remix or spitting over AC/DC's "Back in Black" on "Back to Da P":

"I'm from the place where everybody know you by your first and your last name
It don't matter if you slang or bang
It's like 35 minutes from the city
They call it the sticks, we give a shit, that's how grimey we is
And niggas from the P don't take shit offa bitch
We hate fake niggas and the smile of snitches
So live in effect from the center quad of P High
Still swagged out like it's like 1985
Look, I'm older now, my toys got bigger
The pressure come quicker, the smog thicker
Listen, where I'm from you either ball or get balled up
Sink or swim, fuck or get fucked
[...]
The place I come from taught me how to flow
how to get dough, dip low, rock sell-out shows
Taught me how to take it worldwide
how to be a hard-nosed player and truly survive
Strive to always be the best
Make your mark, don't just bark or beat on your chest"