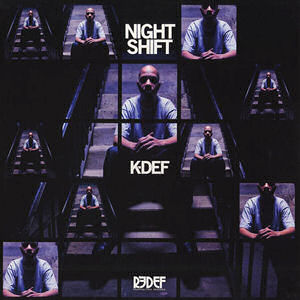 It used to be, in the days of wayback, that beatmakers could only make a name for themselves when somebody rapped over their stuff. Then came Shadow, Krush and RJ and changed the game. Today instrumental releases are a fine way for producers to connect with the listener. Or reconnect, in some cases. Kevin Hansford b/k/a K-Def once brought a breath of fresh air into Marley Marl's House of Hits on records by Intelligent Hoodlum, Lords of the Underground and Da Youngsta's. Then came his own shot at rap game fame with partner Larry-O as Real Live in 1995. But it wasn't until ten years later that K-Def resurfaced with production for the Theodore Unit album and a curious credit on Diddy's "Press Play." His contribution to the 2008 "American Gangster" remix mania, "Real Live Gangster," left many competitors in the dust, and after releasing two volumes of "Beats From the 90's," he returned in late 2011 with a brand new EP.

"Night Shift" starts with a blast from the past as K pays hommage to Pete Rock's "Main Ingredient" track "Escape" with "Escapizm." He enlists the help of Pete Rock affiliate (and "The Main Ingredient" guest) Rob-O, who brings that relaxed Mount Vernon flair to a track that is quite true to the original. Inspired by "For Pete's Sake" but very much a creation of its own, "For Def's Sake" is another nod to the Soul Brother, the added Skull Snaps drums fitting right into the evoked era of the early '90s.

Also a tribute of sorts are K-Def's takes on previously used samples in combination with other sources. "Supa Heath" builds on the same Heath Brothers sample Tip used for "One Love." "High Stakes" revisits the De La/Dilla collabo "Stakes Is High." "Bird Flying High" flips The Blackbyrds' "Dreaming About You," whose opening sequence can be heard on, for instance, Da Lench Mob's "Lord Have Mercy."

As I listen to various hip-hop producers who already done paid their dues, I notice that they become appreciative of musicians and instruments. While they once may have raided thrift stores, swap meets and flea markets for the sole purpose of finding material for a banging hip-hop beat, they now show a reverence for the actual record they once stripped of its seemingly best parts. Listen to K-Def align the sounds on tracks like "Driving," "From Da Brain," "Sparkle" or "Times Change," and you hear instruments really being taken care of and put in the best light. K-Def isn't in a rush these days, and it shows in the measured vibraphone of "Sparkle," the extensive, decelerated rhythm section of "Slow Two-Step," the crystal clear seperation of basslines, guitar twangs, percussion, Rhodes, etc. in "Driving" and "From Da Brain."

Don't mistake "Night Shift" for a nostalgic trip into '90s hip-hop, because that's not how hip-hop sounded in the '90s. Rather K-Def studies hip-hop's source material, for example Ronnie McNeir's 1972 composition "In Summertime," which is given the chance to blossom again in "Times Change." Regrettably, the result is still an instrumental hip-hop beat. Don't get me wrong, K-Def is good at what he does and I personally like everything about the music itself, but by sticking to soul and funk samples ("Indian Juice" being an exception) and forging them into hip-hop, he fails to break out of the box his generation seems stuck in.