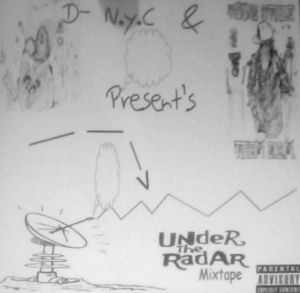 First and foremost I want to thank D-N.Y.C. & Yung Steez for taking the time to do an interview with me for RapReviews.com last week. They were not forewarned about the possibility ahead of time - they were there to be the local act opening for the Black Cloud Tour. Despite being caught off guard they took full advantage of the opportunity and delivered with a 15 minute conversation talking about their hustle, creating music with meaning, and even making some predictions about Nebraska football. If you haven't already had the chance to check it out, I've included it below.

After the interview they handed me a copy of this "Under the Radar Mixtape," which includes songs they were performing live that night. Now it would be easy for a grizzled reviewer like me to snark on the cover art, but I realize that as young up-and-coming rappers they don't necessarily have the budget to drop bills on a graphic designer. I can respect that because after all the music matters more than the artwork; the beats and the rhymes take precedence over having CD bling. It's definitely a homebrew CD-R affair, but again I applaud the hustle of them actually HAVING physical product at the show. So many times a local act opening for a national tour doesn't have the confidence to promote themselves or the moxie to bring their own merch. Since Yung Steez & D-N.Y.C. did, that puts them a half-step ahead of the rest.

There are two stand-out tracks on the "Under the Radar" mixtape out of six songs total. When I ripped the CD to iTunes it actually had seven tracks, but the "Intro" doesn't really get into anything that you could call a song - it's just a shoutout to who they are and their ambition to be "Climbin' Charts" that's slightly over a minute long. As a set-up for "Underdogs (How I'm Feelin')" though it'll do fine since that's one of the aforementioned stand-outs. It's set up over a mellow and laid back piano sample crackling with static. Paired with a solid percussive backdrop and other musically layered tracks, it shows depth instrumentally AND lyrically:

D-N.Y.C.: "Ray Lewis; yeah I could B-More
Nah, can't take no detour
I seen those signs in my dream revealed
Can't think like that - who dreams they killed?
No artificial love, my heart's too real
So keep it real, I love my hood but can't stay here There's more to life"

The other song that really catches my attention on the album is "Losing Seconds," as it has the swag of a Dirty South song you'd hear from Plies or Rick Ross. That kind of polish suggests Steez & N.Y.C. sought out quality beats for their raps, which as the reviewer I definitely appreciate. However there's something that sticks out like a sore thumb among these six songs, and that's that during "Loud" you actually hear the words "purchase this track now at The Kush Administration dot com" over the instrumental. There are no liner notes for production, but this makes it pretty obvious who produced the track.

Now if you want to give them the benefit of the doubt, it could be that N.Y.C. & Steez rapped over the demo, liked the results, THEN purchased the beat to put on their mixtape. I'm more than willing to accept that interpretation since having met both emcees they strike me as earnest about their grind and not looking for shortcuts to success. That being said, it still means they put the demo version on their mixtape instead of the finished product - and with no malice meant I have to point out that's sloppy. It's early in their career though so these are the kind of mistakes they should learn from. As long as we're on that subject, what is in the liner notes doesn't match up to the music well. "Loud" is listed as 4:31 in length when it's actually 3:02. The album's other stand-out song "Losing Seconds" is listed as 5:05 when it's actually 3:52.

To conclude a long story on a short release (22 minutes total, more or less an EP) I think D-N.Y.C. and Yung Steez are on the right track. "Under the Radar" is a promising start, and whatever errors are on this disc or in the liner notes may have just been due to their rush to deliver product in time for their show. That's alright, but like EPMD said years ago, "slow down baby." It's impressive to have product when you're the local opening act, but it's even MORE impressive when you deliver a quality product where everything is tight and there are no missteps in execution. It's obvious they know how to promote - both Steez and N.Y.C. hustle on Twitter and even have their respective Reverb Nation accounts linked to their profiles. It's obvious they know how to seize opportunities that come their way. What they need to do now is polish up their product to get to the next level.