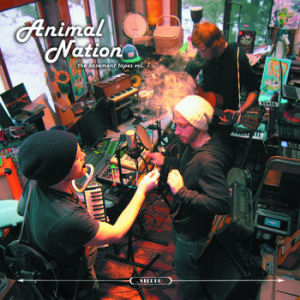 As I like to do now and then, I'm going to defer to the artist's actual press kit to let you know who and what Animal Nation are. Ladies and gentlemen, here are the words of URBNET Records.

Damn! If only I had known heard Animal Nation before Mega Millions, I could have claimed my share of a half-billion dollars. Then again I don't need that much money - I just need more in my pocket than 50 cents. Anyway I don't know if that much hyperbole is warranted for Animal Nation, but in an already overcrowded music marketplace, you have to give them A+ for effort in trying to get my attention. Getting past the press release, I noticed right away on "The Basement Tapes Vol. 1" that it's fair say they're not TRADITIONAL. hip-hop. That's not to say they're not inspired by hip-hop though, because their album opens with a "Kurtis Blowtro," and the opening song "The Fez" uses a very famous hip-hop break: "Impeach the President" by The Honey Drippers. (Personal note: one of my favorite usages is "As We Go" by DJ Jazzy Jeff & The Fresh Prince.) Here's a lyrical sample:

"Now this is what I am, you gotta understand
I'ma do it with my fez on, do it with my fez on
I'm doin 20 somethin years in this game
I ain't ready for a baby, or AIDS, or even a lady
Just help to get me back to her home (I went once)
But backup is wherever I go (I won't front)
I keep it in my wallet of my pocket or near somewhere I can cop it
if the situation's gettin kinda hot like DAMN!"

You could call it a modern day "Jimmy" update, even though it has the sound and feel it could come from 1988. That's not necessarily typical of Animal Nation though, as "Wooden Roller Coaster" is a strange yet enjoyable hybrid of Gym Class Heroes and B.o.B ("I need a wish right now.") The "Party Animals Reprise" sounds like it wants to be a country banjo jam, which makes me wonder what the ORIGINAL was like before it got reprised. The cutting and scratching is pretty nice. They also eschew convention on an admittedly "strange journey" they call "The Lasagne Song," which cuts a rug over a big band swing song style, which is definitely not the average hip-hop track you'll ever hear.

This EP blows by kind of quickly at just over 23 minutes, but that may be in part because it totally blew my expectations away. It's so easy for so many artists to claim they're doing original hip-hop and yet be the same old shit lyrically and musically that everyone else is, but I actually get the feeling Tall Man and Armadillo Slim lived up to their hyperbole by the end of "The Basement Tapes Vol. 1." What's next? Will they bust rhymes to an Irish jig, or Russian folk music? You never know, but I'd be willing to bet whatever they come up with will be worth the listen.