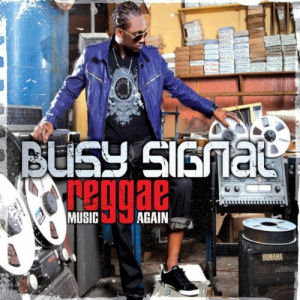 Jamaican dancehall artist Busy Signal (known to his mother as Reanno Gordon) has gone through some stylistic experimentation since coming on the scene in 2003. His first single, "Step Out," was hardcore dancehall complete with gunshots. On his 2009 album "D.O.B." he went soft rock, covering the Commodores' "Night Shift" and Phil Collins' "One More Night." Last year he went country with a cover of Kenny Rogers' "The Gambler." For his latest album, "Reggae Music Again," he's (mostly) ditching the Auto-Tune and synthesizers and going roots.

The album opens with the roots track "Run Weh." The sweet backup vocals and grooving riddim mask dark lyrics about driving the wicked out. "When the city vampires and the zombies them rise/Still he fi go hide from Jah-Jah's sunlight," he sings, and I can't figure out if he's talking about the second coming or a zombie apocolypse.

"Modern Day Slavery" and "Kingston Town" both have a wicked dub riddim and explore the darker side of life in paradise. The title track sounds like vintage Gregory Isaacs, with Busy Signal getting nostalgic about the golden age of reggae. Ironically, his image of "happiness on every face/peace and love for every race" doesn't accurately describe the reggae music of bygone days. Jamaica has always struggled with poverty and political oppression, and the music has always reflected that, albeit in a much less raunchy and nihilistic way than a lot of today's music.

There are echoes of reggae from years past all over "Reggae Music Again." Anthony Red Rose and Joe Lick Shot back Busy Signal over a raw, stripped down beat on "119," which has echoes of Wayne Smith's "Under Me Sleng Teng." "Wicked Man" interpolates Junior Byles' "Beat Down Babylon." The production on much of the album tones down the contemporary R&B and hip-hop elements, going for a warmer sound. Busy Signal does get his inner R. Kelly on with "Come Over (Missing You)," and there are a few other tracks that sound more contemporary. For most of the album, however, Busy Signal seems to be looking towards Lee Perry, Big Youth, and Sugar Minott for inspiration.

"Fire Ball" is a prime example of what this album gets right. The riddim is layered and complicated, a nice contrast to Busy Signal's machine-gun chatting. It takes the soulful elements that make older reggae so great and adds better production values and a modern singjay's abilities. The result is the best of both old school and new school reggae music. "Reggae Music Again" is nostalgia done right, and a fitting tribute to reggae's long history.