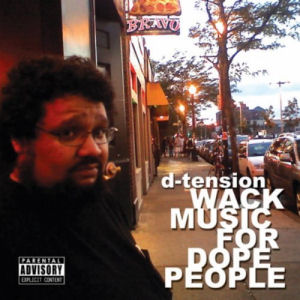 When I was compiling my 2011 round-up in December I found it a lot more difficult narrowing my initial list of twenty or so albums down to the required ten that I viewed as the best releases of the past twelve months. Names were added and then crossed out and then added again before I finally settled on the ten that I felt best reflected my year in hip-hop. Some of these albums found their place due to the MC's spitting pure fire (Apathy, Random Axe) while others had a whole LP's worth of beats that knocked hard (Doppelgangaz, Mister Jason). However the first album that I scribbled down on my list made it for an entirely different reason. Entertainment.

As a producer, D-Tension should need no introduction. A well-known and respected name behind the boards in the indie rap scene, Mr Perez has served up his own unique brand of heat for a seemingly endless list of underground favourites. Slug, Esoteric, Termanology, Apathy, Vinnie Paz, Thirstin Howl III, Mr Lif, Encore and Akrobatik are among the 'dope people' that have showcased their talents over D-Tension's own special brand of 'wack music'. While D has never been frightened to pick up the microphone and craft a few songs of his own, a twenty track album where guest lyricists are kept to a bare minimum is quite a difficult project to undertake and execute.

If you are not familiar with D-Tension as an MC then you will definitely find the opening track "Keep the Party Started" pretty confusing. At least for the first half of the song anyway as D narrates his way through a typical rap star's party:

As the track progresses you get a glimpse of what D-Tension the rapper is all about as the morning after brings some unpleasant surprises which give us the first glimpse of his comical side:

"We got a big mess, we got some puke stains
We made a lot of noise and then the cops came
We got arrested, the girls are underage
We're gonna 'keep the party started'..."

"We got a dead girl, in the swimming pool
Nobody knows her name, this shit is not cool
We got some hot cars, this ain't no April fool
We're gonna 'keep the party started'..."

Next up is "I'm Insane", an up-tempo ode to himself and his impressive yet modest standing within rap delivered with the sense of humour that you should expect after the first track. "I'm so Old" is a brassy celebration of ageing gracefully within rap, embracing everything from the Sony Walkman to argyle socks with references to missing teeth and dead grandparents thrown in for good measure. Anybody who has ever lived in a shared house may be able to relate to the rapidly souring relationship contained within "My Roommate". While "Teacher's Pet" and "Spaghetti" maintain the pace and original humour of the earlier tracks, things drop off a little for "U Ain't Gangsta" where our man decides to have a few lazy pops at hip-hop's superthugs.

The album is back where we left off with "Hypeman" though. The Hangover excerpt and the booming, racing drums set the tone and D uses the three minutes of manic music to let the listener know why he'd rather take the stage solo. The topics are so varied here that porn, alcohol and sport were just three of the subjects on D-Tension's mind when he was thinking of "How to Prevent Terrorism" before the script is completely flipped and we get to hear about D getting down and dirty with the wife of his local bartender in the excellent "Carl". For what seems like eternity rappers have been glorifying life 'in da club' but on "Outside Da Club" we are treated to an alternative take on a rappers night out:

"Outside the club with the scrubs and the broke ass fellas
Passing out their mixtapes, hating coz they jealous
Underage chicks turning tricks with the bouncers
Line ain't moving, it's been three hours
Power move makers and the VIPs
Cutting to the front and they getting in free
But me? I'm just killing time with the flask
Bouncer looking at me like "Don't even ask!"..."

While the calibre of the music on D-Tension's "Wack Music for Dope People" was never going to be in question, the fact that D pretty much managed to hold down the entire LP by himself AND still keep me entertained by the twentieth and final track is no mean feat. While he is technically not without his fair share of flaws, he can often be heard cramming too many words in to a punchline, his semi-nasal delivery and honest flow is nothing but endearing. To be honest D-Tension just sounds highly likeable on the microphone and you WANT to listen to him spit his awkward stories, he is like the hip-hop equivalent of that funny guy down your local boozer who can often be found keeping the regulars amused. Practically all of the tracks here are highly entertaining and you find yourself hanging on to every word to see just how that particular tale is going to pan out. The quality of the narrative is such that on the first few listens you almost won't acknowledge the lushly layered production sitting underneath it and it may take a good few spins for you to appreciate why I rate this album as one of the best from 2011.