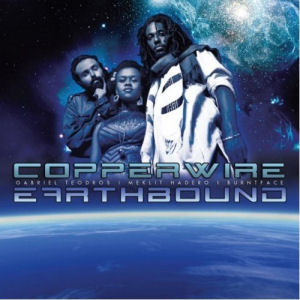 "WARNING: Please be advised that hazards are inherent if you involve yourself with CopperWire, even indirectly. The spacecraft has been stolen. By involving yourself in any way with the fugitive CopperWire, you do so with the understanding of potential risks and permanent damage to your reputation as an accepted law-abiding citizen."

The fugitives in question are Ellias Fullmore (a/k/a Burntface), Meklit Hadero and the author of one of my favorite albums so far in 2012 - Gabriel Teodros. His name was reason enough alone for me to check out CopperWire's "Earthbound," an album painting the trio as hip-hop Gallifreyans, gallivanting across the universe in a stolen spaceship which just COINCIDENTALLY has landed on Earth (funny how it always seems to work out that way). They're trying to blend into the populace as ordinary humans, but can't help but let their musical impulses out:

"What you think we do all day? Swap flies?
We got two-ways and flip phones shipped in from Dubai
And my little cousin [...] bustin raps on the Skype
Held the laptop out the window, tried to show him another life
One day, he'll see his sister, my father raised half her life
I told him to keep on spittin e-mail tracks like a kite
Take advantage of the time difference, make tracks overnight
Divine wisdom is the prism as we fracture the light
They say I'm a (w)rapper... cause my packaging tight
Send a package to Africa, I'll bring it back on a flight"

Even though a lot of time and thought went into the packaging and marketing of CopperWire, including a short story written into the folds of the liner note by Nnedi Okorafor ("resident Naijamerican novelist alien sorceress"), I'm going to take the radically bold step of declaring it TOTALLY UNNECESSARY. That's not meant to be an insult; rather it's meant to convey that the music of CopperWire can simply exist, simply be enjoyed, without the extraterrestrial context to consider it in. The most telling part of the press kit may be in the opening paragraph: "When [CopperWire] met in the studio to see what happened, so many great songs tumbled out so far and the creative connection proved so strong, that the three knew there was no looking back."

"Earthbound" is a rather short album by today's bloated standards, 10 songs and 37 minutes, but there's no wasted time to be found in that short expanse. While CopperWire has a hip-hop heartbeat thanks largely to Teodros' contributions and influence, this one probably fits the expansive "world music" definition better. As a writer I'd prefer the term "mood music" though - because each song evokes a pleasant and lingering mood that invites repeated listening. The mellow and jazzy "Mahalia Einstein," the frantic and caffeinated "Wake Up," the electronic bopping groove of "Creation" and the quietly strummed and sung vibes of "Speak" each being completely different from the other yet tied together by this collaboration.

I know in advance who this album WON'T appeal to - the fans of Future, Kid Ink, Ca$h Out and Kirko Bangz. There are no simple platitudes here with mediocre singing and AutoTune assistance. There's no coke, weed, or swag to CopperWire. They don't beez in the trap, they beez from outerspace. Works for me. Perhaps it will work for you too. If you need a break from the monotony of glossy flossing saccharin sweet treats pumping out of the radio, steal a spaceship and go on a CopperWire journey.