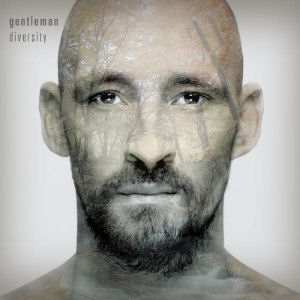 First impressions can be totally wrong. I've been at parties where the shlubbiest, mousiest guy there was also a multi-millionaire. People I thought were stupid and shallow turned out to brilliant and deep. So it shouldn't suprise me that my first impression of reggae artist Gentleman's new album was off-base. I made my judgement in the first 52 seconds of the first song of his latest album, "Diversity." His bio had me skeptical: A white reggae artist? From Germany? The well-meaning but lightweight music on "The Reason" added to my suspicions. And then he dropped a cliche so tired that even the most patchouli-soaked hippie wouldn't say it: "Mother Earth is in pain/Oh how She cries." Mother Earth crying? Are you serious? With that, I wrote Gentleman off as a cheesy and completely ignorable.

Luckily, I left "Diversity" on my MP3 player, and found myself not skipping the songs when they came on shuffle. I was initallly drawn in by the bass-heavy dancehall track "Tempolution." Over a thick, languid riddim that echoes Tenor Saw's "Ring The Alarm," Red Roze and Gentleman trade licks about killing a rival sound. I was sold with the King Jammy-produced "Good Old Days," which features late reggae legend Sugar Minott. Like the best singjays, Gentleman is equally adept singing and rapping. True, he does occaisionally drop cliches like the whole Mother Earth line, but he also drops some genuinely heartfelt and sincere lines. There is a crossed-out pistol in the liner notes, making clear that Gentleman is not part of the slack and violent elements of dancehall culture. He focuses strictly on the positive. "Send dem soldiers home," he sings on "The Reason," "Too many fatherless children out there on their own." Even his patois doesn't sound forced or phony. He splits his time between Cologne, Germany and Kingston, Jamaica, and he manages to make lines like "We got the powers and we tell dem seh we nuh resign" sound natural.

The production is also solid throughout, finding a nice compromise between acoustic reggae and digital dancehall. Acoustic guitars and pianos are constrasted with drum machines and synthesizers. He even does a decent pop song with "To the Top." With all the elements in the album there is a balance between the harder dancehall elements and the sweeter, melodic elements. The recording of the album was split as well. Most of the instrumental tracks were recorded in Austria, while the vocals were recorded in Kingston, Jamaica.

I wish the harder edge had won out more often on "Diversity." There are a few more ballads than I needed, and not enough uptempo tracks. That said, one of the best songs on the album is the ballad "Another Melody," with Tanya Stephens. Over a sparse acoustic guitar melody, Gentleman sings

"Rude boy the war could over
But you still buss that gun people run for cover
If you take your time you'll discover
Without the noise oh yes we could rejoice
The taking of a life does it bring you joy?
When the only thing that happen that we self destroy
In teh making of great undertaking
Vision forsaking knees them keep shaking
Life could be a sweet refrain
But the only thing we feel is pain"

Gentleman may not always be the most original lyricist, but his conviction and passion sell his music. Give "Diversity" a chance: it may suprise you, like it suprised me.