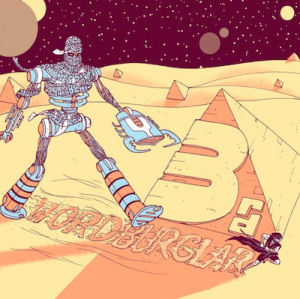 "I come prepared like mustard - sick with the rap flu
'It's Wordburglar!!' You're damn right, I'm that dude
Is that rude? Nah, I'm just usin my rap 'tude
Plus I'm good at cuttin +Peoples+, like +Babu+"

It's possible that in 2012 being a punchline rapper has become passé, but Wordburglar proves on "So Much Time" that he never got the memo, proudly proclaiming "I rap for people who really love rapping/heard so much crap that they stop and say 'WHAT'S THAT?'" Both things encapsulate Matt Tomer's reaction to him in 2006. In short Tomer appreciated that Word was "lighthearted enough to avoid stagnancy" yet simultaneously disappointed Word felt "being silly [was] an adequate excuse for dropping wack rhymes." Since I own a copy of the album he covered, I feel both statements were accurate, but they also define Wordburglar as he was six years ago. Perhaps Wordburglar has evolved.

As it turns out SOME of this criticism of Word is still fair in 2012. There's no question he's still a lighthearted, comical dude who believes in punchlines first in his rhymes. There are times you might even think he's only writing to amuse himself, but that's not necessarily bad. The late Mitch Herberg built his entire shtick around writing down anything he thought of that seemed funny, and as it turned out most of the time when he told other people they found it amusing too. By the "3rd" go around though, Word has delved even deeper into another thing Tomer mentioned that may or may not have been complimentary - nerdy topics. "Drawings With Words" is a double entendre in title and topic, with +comic+ lines like "You like Starfox? That wouldn't bug me/Dude saw more pussy than Catwoman's undies." It might not have been his intention to fall into the #nerdcore category but after hearing "Dude, Where's My AT-AT At?" I can't picture a better fit.

At times Wordburglar lets his peers get in on his dorky fun, such as More Or Les on the song "Rhyme O'Clock" and Timbuktu on "Sneaky Neighbours," but for the most part this adventure into geek life is entirely Word's own. There are times he goes so deep with being a wordsmith it may entirely go over your head though, like when he drops the colloquialism "Sufficiently Suffonsified" - a phrase rarely heard below the 54°40', referring to eating until you've had your fill. As if that wasn't a clue to where he was from, he immediately drops a line about whether or not Sidney Crosby or Bobby Orr is the better stick man. So he's a hip-hop nerd, and if I can be the punmeister of double entendre that Word is, I'd venture to say that makes him the +Great White Nerd+. Whenever it seems like this might be too much to take though, production by the aforementioned Timbuktu along with Beatmason, Uncle Fes and Fresh Kils hold things together. "3rdburglar" is unapologetically dorky, but also unapologetically fun.