Illogic and Blockhead :: Preparing For Capture :: {self-released}
as reviewed by Patrick Taylor 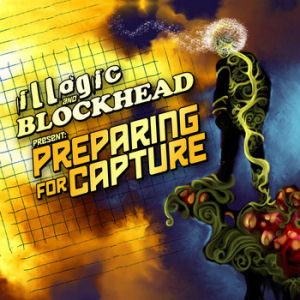 New York producer Anthony "Blockhead" Simon has been making hip-hop beats since the days of dial-up. He was a frequent collaborator with Aesop Rock, and has also released five solo albums, including his recent "Interludes After Midnight." Columbus, Ohio MC Illogic has been making his brand of positive rap for as long as Blockhead, releasing seven albums since 2009. Now they have banded together for this EP.

The album starts with a woman declaring "Music is the bridge between earth and heaven." The beat starts with pounding floor toms and a sample of a man singing. Blockhead mixes in piano flourishes and guitar, so that the beat is provided by both the drums and percussive piano. It's banging and beautiful, which is what Blockhead does best. Throughout this EP, and his entire career, he makes hip-hop that combines head-nodding beats, non-traditional sonic elements, and a pretty but sad vibe. He uses drums, pianos, flutes, and guitars to make music that is banging and melancholy at the same time.

"Nails" has a bluesy vibe thanks to a slide guitar and harmonica, providing a nice template for Illogic and Rob Sonic to trade lines. "Ego's Orbit" uses reverbed buitar as the backdrop for Illogic's introspective rhymes, dropping lines like "What do you do when you don't wan to do anything/When you're a caged bird without a song to sing?" "Weigh You Down" has an upbeat disco beat. The album ends with another bluesy song, "HERstory," about a young woman born into an abusive household who finds herself following the same tragic path as her mother:

"Daily operation of defensive mechanics left her trust issues in the forefront
Now she's twenty simply timid to love
Above all she wanted to feel
She was haunted by memory reels of the bloody noses her mom rocked to sleep
Her self-esteem was a mountain too steep to climb
So at times she'd sniff lines to leave her mind and find safety
She had nothing to stand for so she fell for everything voluntarily
while longing to lead a life worth cherishing
This lead to one night of binging with alcohol, cigarettes, ex, coke and weed smoke
Which caused her to feel so empty
But the multitudes of men manipulated her melancholy
The only thing she felt the only thing she could control was her body
Her innocence was lost at 14, she left home at 16 with the clothes on her back
And a duffel bag of shattered dreams
She camouflaged her screams with eyeliner and empty smiles
While the sunbeams beamed with a brilliance that was seen for miles"

"Preparing for Capture" is a team-up of two underground hip-hop artists who have been traveling under the radar for over a decade. Both Blockhead and Illogic are too often overlooked and underrated, taking a backseat to lesser but flashier artists. They've brought out the best of one another with this EP. You can download the eight songs for free at their Bandcamp page, but it's worth paying eight bucks to get the physical copy with two extra songs.