:: Fill in the Breaks
as reviewed by Zach 'Goose' Gase 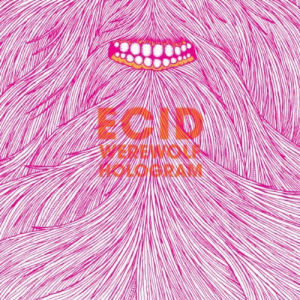 Minneapolis rapper/producer Ecid's latest release "Werewolf Hologram" is well… weird. Hip hop has long embraced the weirdo from Slick Rick in the 80s, Ol Dirty in the 90s, MF Doom in the 00s and in recent years, Danny Brown. Ecid wears his odd ball badge proudly as he boasts on the album's finale: "I'm trying to dumb it down but don't know infant / I'll admit I'm on the weirder side of different / But weird is in again so I'm all-in, let's start a business." Yes weird is in, and probably has been in for a while, but what makes weird rappers like Doom and ODB successful is that they have great personalities to complement their weirdness.

Ecid and "Werewolf Hologram's" main drawback is Ecid's lacks a big personality to go along with his zany lyrics and production. His voice on many tracks is as grating as they come, and his style reminds me of early Geologic (of Blue Scholars) but with less charisma. It is something that he seems to improve on as the album goes on, but the first few tracks are especially hard to get through. Lyrically, Ecid is pretty solid and occasionally has pretty dope one-liners like "I've got friends that'll steal your watch, and be like ‘yo bro, what time you got?'" but has a few too many stand out wack lines like "You wanna change, but your wardrobe's limited."

But what makes "Werewolf Hologram" worthwhile is Ecid's innovative production. The title track has a very dope whistle sample to go along with neck-snapping drums. On "Go High Lion" he chops up a vocal sample very similarly to Bangladesh, but adds many different elements to make a unique sounding beat. On one of the album's best tracks, "Incredible" he takes a beat that sounds pretty traditional boom bap, and adds some pretty interesting sounds during the verses that are more fun to listen to than most of his rapping.

Ecid certainly isn't the worst rapper ever, and he seems to have a lot of good ideas and song concepts. And on the high points of "Werewolf Hologram," he is actually pretty thought provoking and clever. On another one of the album's stand outs "Oh Well" he raps about a suicidal friend who refuses to get help:

"So you're free falling off the wagon into glue manure
Thought you were the self-employed entrepreneur
Used to be the school nerd now you're so Franklin/Seward
You forgot who you were
So today's the big day, the day you play hang man
With a vacuum cleaner cord and a ceiling fan"

Overall "Werewolf Hologram" is a pretty uneven album. Ecid is a very talented beatsmith and a pretty solid rapper, who pieces both skills together for about half the songs on the album. The other half consists of lazy hooks and sloppy rapping. "Werewolf Hologram" could've been improved with additional guest appearances. Only two tracks feature rapping from someone other than Ecid (one track features the late, Minneapolis hero Eyedea), which made his unfavorable voice more difficult to listen to. Ecid and "Werewolf Hologram" is definitely an acquired taste. It's the type of album that a lot people will dislike, but it will also be some people's diamond in the rough. As someone who likes and expects creativity in hip hop, I can appreciate Ecid's weirdness, but as a whole "Werewolf Hologram" is somewhere in between.