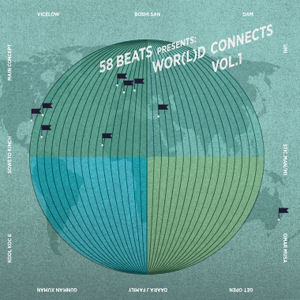 Yeah so technically this is billed to 58Beats, but effectively "Wor(l)d Connects Vol. 1" is somewhat of a follow-up to Glam's "Laceration," which we covered in 2007. As 58Beats' in-house producer he crafted all the tracks on the label's latest release. The difference is that this time around the global connections were established through Urban Vibes, a concert series taking place in Munich since 2006 that aims to showcase urban music from all four corners of the world.

Urban Vibes is an official event held under the auspices of the city, more precisely Munich's Department of Arts and Culture, sub-sections Cultural Education/International Relations/Urban Cultures. The idea behind the event has been expressed as follows (translated): 'Global musical cultures such as dancehall, drum 'n bass, hip-hop, R&B, soul, etc. have been the common language of young people of different ethnic and cultural backgrounds for a long time. They enable exchange beyond stereotypes and prejudices. At the same time these styles of music have become a platform for local appropriations and interpretations. Through adaptation local variations and urban mixtures developped - new sounds and styles who not only are influenced by domestic traditions but also by the musical language of immigrants. The project aims to be more than a series of concerts. Conversations with artists, promoters, etc. give insight into cultural backgrounds, their way of making music between tradition and modern times, and how their music is perceived.'

Replace drum 'n bass with dubstep and all of the above holds true in 2012. Glam and crew stick to hip-hop, but they demonstrate diversity on plenty levels. Senegalese rap veterans are featured back to back on track one and two. With someone chatting in patois over a funky, bouncy beat, "Who We Are" could be mistaken for a Kardinal Offishall track first, but the French and German raps that follow mean that Dakar's Pee Froisss are joined by David Pe, rapper for Glam's group Main Concept. Characterizing his vocabulary as regional yet his language as global, David Pe affirms that the whole 58Beats posse can get behind a project like this. Daara J Family, from Dakar as well, also take the multilingual approach (English and Wolof) to make sure you heard them on "Universal ID: "It's not about the color of your eyes / neither your confession or your gender or your size / It's alright if we accept our differences."

"Who We Are" and "Universal ID" both feature combinations of singing and rapping, not the kind that dominates the urban charts these days, but an organic intertwinement rooted deeply in black music. And Glam's beats, one more loop-based, the other built like a band arrangement, provide a highly musical experience that also speaks to an audience not raised on hip-hop. "It's bigger than hip-hop," revolutionary rap duo dead prez declared on their breakout single back in 1999, a fact they prove once more with "Keep it 100," a soulful slow jam where "grown folks do grown things" that features Pee Froiss' Gunman Xuman next to dead prez associate Umi, who later returns on the solo tip with "Walk the Walk," a spacey production replete with layered percussion, talkbox vocals and funk keys.

Another American feature dates all the way back to 1998, when Main Concept teamed up with Crown Heights representative Problemz for the single "Who Got the Flavor?" - proof that David Pe, Glammerlicious and DJ Explizit early on were looking to collaborate across national borders and language barriers. A vital link in 58Beats' global network is a certain SibaGiba, who seems to have biographical ties to both France and Germany but is also known to bring his Brooklyn rap crew along, Get Open. Their collabo with Main Concept, "Give it to Me Clearly," dates from 2003. SibaGiba can be found on two more tracks, the airy "Algo Para Creer (Something to Believe In)" from his own 2002 jazz hop venture "The Brüknahm Project," and the 2001 posse cut "The World Ain't Ready" which includes German rap superstar Samy Deluxe and rugged Brooklyn crooner DV Alias Khryst.

But from the 58Beats vaults back to the present. "Heat it Up!" pairs two fresh voices, Australian MC and poetry slammer Omar Musa and British rapper and jazz alto saxophonist Soweto Kinch, who clash over a bleepy, bumping track. Pee Froiss finish what they started with "Who We Are," the electro-tinged throwback "Unity (Sweet Dance)," another example of how international hip-hop artists tend to be more in touch with the artform's roots than the average American rapper. Either way "Wor(l)d Connects Vol. 1" lives up to the promise to put a few of the many local nuances of rap music on display, last but not least with two cameos that must have been particularly challenging because the rappers are of especially unique origins. "Deja El Mareo (Stop the Madness)" with Cuban MC Ulises Quińones captures a cliché-free Latin vibe and catches Glam at the height of his craft. "Déją Vu" is more hectic with a touch of early '90s hardcore hip-hop but equally fitting for Palestinian rap pioneers DAM (Da Arabian MC's). Together with the finale, the sunny "Bring What You Got," these latter tracks generate a strong finish.

The Bavarian capital is known all over for the famed Oktoberfest, reportedly the world's largest fair with well over six million visitors. But Munich is about much more than traditional folklore, as evidenced for instance by the Urban Vibes festival and the 58Beats label. The sticker on the CD advertises "Wor(l)d Connects Vol. 1" as nothing less than 'THE INTERNATIONAL HIP HOP SENSATION 2012.' I wouldn't go that far, but it's most certainly a buoyant assortment of hip-hop and rap music as it's practiced all around the world.