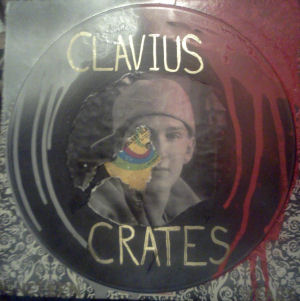 Clavius Crates from the Tree City crew got an immediate spin thanks to two different factors - one of which is that I haven't heard enough from them since The TreE.P. and the other is that I still have a soft spot in my heart for Ann Arbor having lived in Ypsilanti, Michigan over a decade ago. It's a really beautiful part of the country, and even though the cost of living there far exceeds the meager amount of dollars I pull in ad revenue and Amazon Associates album sales

, I can honestly say I'd love to live there again. The hip-hop scene in Eastern Michigan still continues to be underrated and overlooked, even with the breakout success of artists ranging from Eminem to MC Breed (R.I.P.) and underground rappers still get heavily slept on.

Speaking of those meager earnings, I'm glad "19 Years" was made available at a "name your own price" level. I admit I entered $0.00 and took the free download, but if I can be a hypocrite, my advice is to do as I say and not as I do. I'd offer him at least $5, because this is 15 tracks of quality hip-hop music, and that averages out to only 33 cents or so apiece - still an incredibly good deal. Crates self-produces a lot of these tracks and doesn't come incorrect in the process. "Classically Trained" featuring Silas Green is a wonder, changing up instrumental themes from verse to verse, while bookmarking the entire presentation with a symphonic orchestra sound. "Apocalypse" featuring Fowl is a bugged out sinister banger that musically and lyrically reminds me of Young Zee. He alternates between rapping and producing on these too, willing to just play beat maestro on airy adventures like "Cavern Jaws."

Clavius gets by with a little help from his friends too though, most notably SOTO, who like Clavius takes on a full third of this album behind the boards. The minimal and elegant "How Far? (Ego Steez)" is a definite headnodder, the lush orchestration of "The Journey" demands immediate replay as soon as I finish writing this review, and the frantic "Paranoia" lives up to the name. With a competent crew of friends and compadres to help him on his way, it's a little ironic that this album was recorded when Clavius was only 19 years old, and that it's taken over four years to get released. It doesn't sound dated at all, which is a testament to how well put together it was, and shows that even at a young age Crates had the tools and ability to succeed. It only makes me anticipate what he could do now with the same tools at his disposal, so let's hope the next album isn't delayed nearly so long.