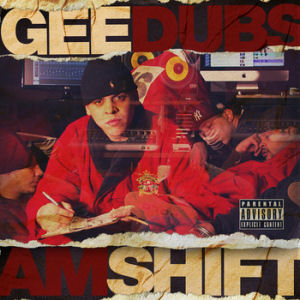 You can call it "New York to Cali" if you like, but it's more like Queens, NY rap artist Gee Dubs linking up with his favorite producer Mike Cali to release a new album called "AM Shift." Even that needs some clarification though, as Mike Chops produced 3 out of the 13 tracks on this album. SFAIK that's no relation to the ORIGINAL beat wunderkind Chops, but I think that's it as far as clarification goes. As long as we're giving out credits for this album though, Jay.W did the mastering and DJ Djaz provided all the scratches.

Speaking of scratching, the album got off to a good note for me on the "Intro" by combining scratches of an alarm clock with KRS-One screaming "WAKE UP!" as he did on the song "Blackman In Effect" from "Edutainment." There aren't enough KRS-One samples in hip-hop these days. Gee has a nice delivery, lyrics that don't embarass me for listening to him speak, a flow that definitely shows some potential. Peep the linguistics:

"Yo, introductory flow style, the gold child
Shine light on your dome now, the skull round
Eliminatin all clowns in the throwdown
Frowned faces, witnesses burial with no found traces
Allow greatness to space, let him think
Dazed off on a page for an hour, didn't blink
Clear the stage, cue the mic to his liking, he'll do his thing
Call his partner for the beats and correct all missing links"

Even though Gee hails from Queens, his vocal inflection reminds me more of Yonkers, being at times a dead ringer for either Styles P or Sheek Louch, and perhaps an amalgamation of the two. Songs breeze by very quickly, with all but one being under 4 minutes in length, and all but four being under 3:20. 2 of the 3 longest songs on the album "Anonymous" and "No Questions" feature his friends in the All City Crew, which explains how they were able to be stretched out. Left to his own devices he appears to espouse a "no bullshit filler" philosophy - he gets in, makes his point and gets outta there. That's why even the "Intro" and "Outro" to his album are actual raps instead of skits, and songs like the short "One" are so effective.

"See there's one girl that everybody's freakin
I fall back and gather all the info that she's leakin
I got this one that wants to fly me out of town
Since I met her every time tax return comes around
And there's one I only greet with my palms
On some cool shit, we fuck in wee hours of the morn
Really what I'm sayin, she ain't all that
It's kind of sad for my standards, but let's move on to the bad ones
Like I will not say names to blow spots up
The ones who run schemes are sure to keep the kid proper
Dipped out, handin me cash, with her fist out
All up in the car that she rented, with my dick out"

There's an eerie buzzing in the background that reminds me of the heyday of the Wu-Tang Clan in a good way. Dubs is a braggadocious rapper who talks a lot about himself, so don't expect a song title like "Orca" to betray any aquatic life intentions, it just means he's a whale in rap. Likewise "Buttermilk" is not going to take you to the farm, but it will take you back through his memories of life "feeling chills up your spine piece" as you listen to the beat. While I can't say anything on this album takes things to a new plateau, and Gee Dubs doesn't drop any memorable punchlines I'll be quoting later on, he's what some of my friends in sports entertainment might call "a good hand" or a "solid midcarder." He does his thing well and though he's not at the top of my pile for 2012, I'll give him my respect.