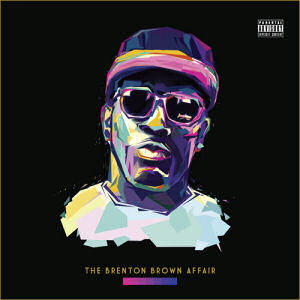 There are several different versions of "The Brenton Brown Affair" floating around the internet right now, but for the purposes of this review we'll concentrate on the retail released version

which is eight tracks long. If you download a bootleg or a mixtape version of B. Brown's release, your mileage may vary. One thing all copies seem to have in common though is a guest appearance by Emilio Rojas on "To the Top."

Brown: "Wake up in the morning, grab my bag and go to school
I'm thinkin 'What the fuck am I doin here man am I a fool?'
They say you strive for what you want, failure is just assumed
4-0-7 get up 8 then make them fuckin moves
You see I'm with that, but man I need a break - Kit-Kats
Chicks wanted that dick and I'm The Pimp Named Slickback
As a youth, I struggled with the nerds and the riffraff
Been down so long man it's time for that getback"

Rojas: "No settlin; I ain't openin doors
for y'all whores I ain't never been a gentleman
Sit down when I get down
Everybody in the spot get a grip now
We be takin everybody on a trip now
When I hit little bitch better get out, how
in the Hell will I write my wrongs?
I don't care any more, I just write my songs"

The R.E.G.I.M.E. is responsible for all eight of Brenton Brown's tracks on this "Affair" and that's the reason there's a consistency to the music throughout. "Put it Down" has the sound of a knockoff DJ Khaled radio hit, with Young Joe playing the role of a Chris Brown or T-Pains singing the hook. "Owww" is your standard braggadocious "life ain't fair but it is for me" type track with a minimal beat and hook that can easily be remembered and imitated. "Double Dare" asks a daring serious of questions: "What if I'm the next Jigga? ... And what if I'm the next Biggie, will you stop me early?/Cause if that's your intention I will stop you niggaz firmly." Among the best of these is the bouncing "Quit Your Bullshitting" featuring Nick London and Benjamin Landsford.

In terms of his technical execution there's nothing wrong with B. Brown - his diction is clear, his delivery is on time, and it comes across like he's a natural spitter who has been doing this for years. The backing music is well mixed with his rhymes, and although it often comes across as mimicking what has worked for other popular artists, that doesn't make any of it bad per se. That doesn't make it original either though. What I'm ultimately searching for is a sign Brenton Brown should muscle his way into an already crowded rap field, and it's hard to find elbow room on this project.

After listening to "The Brenton Brown Affair" several times, one can only be left with mixed feelings, and songs like "Are You Ready" featuring Lopez don't really help. He straddles that line between commercial and rugged, but does so in a way that makes him interchangeable with anybody from Fat Joe to Jadakiss. Perhaps that's indicative of the fact the artist himself came from New York City and now calls Miami his home. He sounds caught between two worlds, decent enough at both, but not dominant in either. He's like the NBA sixth man - a guy you'd call off the bench to make a play, but not an all star (yet).