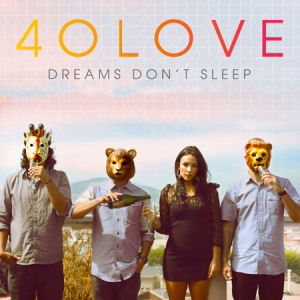 "Dreams Don't Sleep" has a funky and fresh feel from the very beginning. Maybe it's the album cover, which features three of the four group members wearing animal masks, or maybe it's their usage of the term "electronic soul" to describe their music, but 40Love has a noticeable edginess that grabs the listener right off the bat. Consisting of lead producer Mikos, emcees Miss Haze and G-OFF, and DJ Whooligan, the four-man group hailing from San Francisco isn't afraid the stretch the boundaries of traditional hip-hop. Of course, any group can claim to blend together hip-hop and other genres of music, but not all of them can do it effectively, and thus I went into "Dreams Don't Sleep" with a cautiously optimistic attitude. In particular, although I had high hopes for the fusion hip-hop sound that 40Love promised to deliver, I wondered whether the lyricism would keep up throughout the album.

After just a couple songs, the impressive range of sounds that 40Love brings to the table is already clear. "Infinite Potential, Pt. 1" has a spacy feel, with a set of dreamy synths meshing with a head-bobbing drum loop to create a hypnotic instrumental, and Miss Haze and G-OFF spit back to back verses to kick off the album. The very next song, though, "Infinite Potential, Pt. 2," has a completely different sound, as Haze and G-OFF switch their style up to match the dubstep-influenced track. Now, I'll be the first to admit that I'm not the biggest fan of the recent dubstep movement, as I can't help but think that a handful of the songs sound almost like pure noise. In this case, though, the recipe actually works, thanks in part to the powerful, in your face verses from both emcees. The lyricism may not be the deepest, but the energy that they bring to the table makes up for this, and it's hard not to feel pumped up after bumping the track full volume.

"Tiki Tiki" follows suit, and the deep, brassy synths mesh with driving guitar and organ chords to create a very vibrant and full sound. Once again, the chemistry between Miss Haze and G-OFF is evident, as the two emcees transition seamlessly between each other's verses. And while G-OFF is no slouch, Haze steals the show with her confident delivery and clever wordplay, with lines such as "I'm better than cover, I temper the temperature/ Weather bends through my temperament, you just a settler/ I'm a competitor, among the best of them, try not to tremble I'm testin' them." "Radio," on the other hand, has a more laid-back feel, with gliding piano keys and a soft set of drums setting the tone. Robot-like techno synths on the chorus create an interesting contrast to the rest of the track, and it is this blend of styles that gives 40Love their unique feels.

After the busy and fast-paced "Bout2Bloom," Mikos and Whooligan slow things down with "Anywhere," perhaps the smoothest track on the album, and pay homage to Common's "I Used to Love H.E.R." with sampled lyrics at the beginning of the song. Guest artist Black Spade spits an impressive verse that fits right in with the jazzy trumpets and faint background synths and catchy bassline. Next up is "Takeanotherlookbeforeyoumakeanotherstep" – yes, all one word – which features some impressive scratched-in lyrics from Nas's "One Love" on the chorus. Like "Anywhere," the track has a laid-back feel and is easy on the ears compared to some of the heavier material from earlier in the album. Then, the crew switches gears again on the upbeat "I Think Too Much," which sees Haze display an impressive knack for speeding up her flow and spitting tongue twisting lyrics to match the techno-influenced beat. G-OFF's rhymes, though, comes off as somewhat overly simplistic, as they seem more like a stream of consciousness than a well-thought out verse.

As the album came to a close with the soothing "Dreamer/Power," I was left wanting a little bit more, as "Dreams Don't Sleep" checks in at just ten tracks in length. And given the range of sounds featured on the album, one can't help but wonder what other tricks 40Love had up its sleeve. Regardless, though, the unique production style that Mikos and Whooligan bring to the table keeps things fresh throughout. And despite my normal distaste for dubstep-sounding music, I found myself bobbing along to tracks such as "Infinite Potential, Pt. 2" and "I Think Too Much." While I was initially skeptical about the album's lyrical complexity, G-OFF and Miss Haze both packed a healthy dosage of quality rhymes into nearly every song, save for a few shortcomings. In fact, Haze is one of the better female emcees I've heard in recent memory, and together her and G-OFF form a dynamic duo that shouldn't be overlooked. Obviously, boom-bap hip-hop fans are going to be put off by the experimental and electronic influences, but those who are looking for something off the beaten path will be rewarded with some worthwhile tracks.