Oddisee :: People Hear What They See 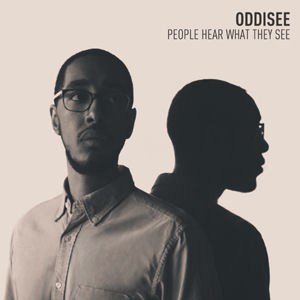 Leading up to the release of "People Hear What They See," Oddisee proposed that he only now felt ready to make a rap record of his own because he finally had, as he put it on a track from 2010, "something worth saying." Commenting on that now available release, the DMV representative carries on with the candor when he writes, 'All too often in Hip Hop, reality is limited to that of the artist's own, actual experiences. People Hear What They See is my attempt to liberate the MC from those constraints and allow reality to be penned other than my own. Listening to congressmen and lawyers converse on the steps of the supreme court inspired American Greed. Watching a couple argue over the phone in a bar inspired Maybes.'

Honestly I was taken aback by that statement. Because when I listen to "People Hear What They See" I hear an MC who speaks from experience and says things that are congruent with the image that I have of Oddisee. Is he right then? Do people hear what they see? Is my perception of a 'rapper' someone who knows what he talks about because he's been through it himself? I know I'd be a fool to believe that, but maybe I still wish it were so, against better judgement. I could go off on a tangent here about certain subsets of rap, or about the genre's greatest artists being observers rather than participants. But I'd like to keep the focus on Oddisee and his in many ways exceptional effort.

First off, if he wanted to project the image of the determined rapper that has long been industry standard, he passes with flying colors:

"I'm a dude about his paper, always kinda been
If I was doin' anything, see, I was tryina win
And if there was no competition, listen
I would make myself the opposition
fencin' with the grind within
It's just my nature, nurture is the way of haters
Learn to like me, I'm connected to the kind of men
that could make ya, break ya
Ties to the underworld, lies with a cover girl
Lies to the other girl home sendin' texts like, 'What time you in?'
Reply 'Later'... the studio be my groupie hoe
In her all night, tryina get my song right
Hopin' that my verse was tight like my first was
First the bus, then the drop; first the buzz, then the top
Happen any other way and you will smack the surface
I'm prepared for the wayward climb and unaware of other ways to grind"

The thing is, Oddisee is totally credible in his role as determined rapper, whether it's in the above quoted "Anothers Grind" or elsewhere. But he doesn't necessarily put it in the usual terms. He prefers putting things his own way instead of taking the easy route. You cannot go that deep and that much into detail without writing from within. "People Hear What They See" is, as a European rapper once called her album, 'From the Standpoint and in the Words of...' - in this case Amir Mohamed el Khalifa PKA Oddisee.

Understanding, experience and action are recurring themes on "People Hear What They See." Oddisse synchronizes his busy schedule with his Diamond District partners on "Do it All" and paints himself as a stand-up guy in "Let it Go." Unlike another DC representative swaggering about "Ambition," Odd studies his subjects, emerging with comprehensive essays that look at failure and success with the same unflinching eye. Where other rappers only excel at self-aggrandization, Oddisee always tempers it with self-assessment.

It's not surprising that he treats relationship songs the same way and that both "The Need Superficial" and "Maybes" stray from the usual formula. Although treading familiar ground, "You Know Who You Are" still manages to astound, while socially critical offerings "American Greed," "Set You Free" and "Way in Way Out" hit home because they can do without political rap's tpyical soapboxing:

"One man's trash is another man's treasure
But most men treasure what other men have
Little is thrown away to the many that will never
grasp what the few view as pennies in the grass
And underneath the grass are the roots of inequality
creatin' all the bumps we come across in the path
And I don't have a green thumb and neither do my niggas
And havin' a money tree is a luxury of class
The only 'hoe' I know got a flatterin' ass
and when I asked could she dig it, she looked at me and laughed
See, we crabs in a barrel and the barrel is glass
So we broke, crack was the answer to cash
But the question was never asked how we get off the path
Steady walkin' in a maze that was built in the last
century; eventually we'll raise our hands
but the teacher is a part of the scam, goddamn"

Of course "People Hear What They See" isn't just a 'rap album,' it's also a producer's album, crafting beats being Oddisee's initial calling. And of course he takes great care matching the music with the lyrics, grounding his reflections in his brand of hip-hop soul that is both serious-minded and free-spirited. And yet the theme here is the MC wanting you to hear and see, a mission certainly accomplished. Oddisee is a thinker and he's come to a point where he can still "think of a few things" to say, as he underlines in the closing "Think of Things." What more can I say than that the things said on "People Hear What They See" are worth thinking about?