Devine Carama :: It Was Rewritten :: Bandcamp.com
as reviewed by Steve 'Flash' Juon 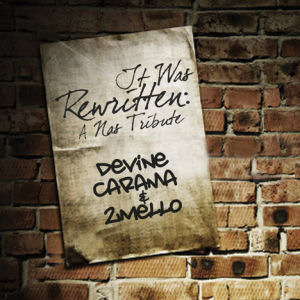 I've been asked by many people over the years to reconsider my views on Nas' "It Was Written." I'm not sure it was wrong to have high expectations of the album considering it was preceded by an all-time hip-hop masterpiece, but in hindsight I was too quick to dismiss his latest album. My issue with the CD at the time was due to Nas exploring a more commercial sound with the Trackmasters, and as such I may not have given the writtens their fair due. The album has aged far better than many contemporary releases though, and without totally rewriting my review (at least here) I'll say there are no shortage of 21st century albums that can't hold a candle to it.

One person has already beaten me to rewriting "It Was Written" though - an unsigned underground rapper from Lexington, Kentucky named Devine Carama. Before going any further cease your preconceived notions about what a rapper from Kentucky would or should sound like - you're wrong. It wasn't just Carama's audacity in paying homage to Nas by redoing his whole CD that caught my attention - it was the fact his vocal tone and flow are closer to AZ than to Ace Hood. In fact if you listened to the clip of "White Girl Lost" below before reading this paragraph and I had told you Carama was from Queensbridge, you'd have accepted the premise without a second thought about it.

"A two parent home, a house out in the boondocks
Closest she ever came to black folks watchin Boondocks
Privileged white girl, third year of college
Worth a hundred mill' she just goin for the knowledge
Her dad was one of the college's biggest boosters
The board took a pic, was like a collage of Lucifers
See - sometimes rich folk logic the craziest
Both of her parents were introvert closet racist
Pops eluded better never bring home a black boy
unless he is a ball player then they didn't say shhhhh
Then she start datin the startin power forward
And her daddy got excited and said 'Cool invite him over'
Three months past, the experiment ran its course
She just wanted to see if he was hung like a horse"

The lyrics show that it's even deeper than that though. It's not just that Carama is taking the beats of the original and having his producer 2 Mello re-sculpt them for the modern day (which he does incredibly well) so he can spit on them - he's taking the concepts of the songs themselves and turning them on their head. Instead of the original Nas song about nubian queens who devalue their own worth by chasing any man with money, Carama imagines a caucasian girl who comes from wealth chasing black men to fulfill her sexual fantasies and piss off her uptight parents. Her premise is just as flawed as the "Black Girl Lost," which shows clever insight by Carama and cuts through the idea that the race of the song's protagonist is paramount regardless of who raps it. Young men and women of all colors and creeds make poor choices whether it's about a quick buck OR a quick fuck.

"It Was Rewritten" is two tracks shorter than the inspiration - 14 as compared to 12 - but doesn't feel any the lesser because of it. In fact let's go one further - if you can't imagine "Live Nigga Rap" without Mobb Deep, then Devine Carama is just willing to go to a place your mind won't. He certainly gets off to a hot start with the first eight bars of the song, and doesn't let up at any point after:

"Cool kids remove your shades, so you can understand
There's too many rappers, and not enough fans
All the whack rappers now tryin to beef with me
used to be the ones noddin they heads up in the stands
I'm truth to they farce, spit seasoned food for thought
while these fast food rappers servin dishes that are bland
It's not your right to be an artist it's an honor, privilege
for the righteous who profits for the projects"

Of course the question you're all asking is the same one I asked when I heard about this album - could Devine Carama take on the challenge of "If I Ruled the World" and equal the original without Lauryn Hill on the hook? I'm going to give him a pass, because you could find the best singer in the world and she still wouldn't equal to Lauryn at the peak of her power and prowess in 1996. Heather Chula tries hard, but she has neither Hill's range nor resonance, and it's a disservice to her to have to play this role. She's probably a better singer than this revisit gives her the chance to be, because anybody in this role falls far short of L-Boogie. And of course it's hard to top Nas here as no one will ever exceed lines like "I'd open every cell in Attica, send 'em to Africa" but "I'd take all the gangsters from the projects and send 'em to college" is pretty close and certainly strikes the appropriate sentiment.

Your mileage on "It Was Rewritten" will probably vary based on how sentimental you are about the original album, and some people will probably get hung up on the idea that at times it sounds like AZ is covering Nas, but if you're a fan of AZ as I am that's not so bad. In fact hearing Devine Carama's "I Gave You Power" makes me not only nod my head in appreciation, it makes me ponder what an actual version of the song from AZ the Visualiza would sound like. The fact D.C. does such a respectful tribute to a Nas album that wasn't universally respected at the time it came out not only elevates this up-and-coming artist, it elevates the album he pays homage to. These aren't just covers - they're original songs set to similar sounds. 2 Mello and Divine Carama didn't create a 1996 album in 2012 - they created a 2012 album that reminds you '96 had a lot to give - and so does D.C. as a promising hip-hop artist of the future.