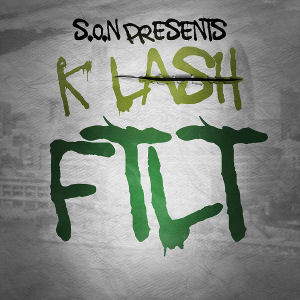 "Yo; yo I used to like Klashnekoff
Yeah man - what happened to him man?
Fuck him; yeah but now I just listen to dubstep
Yeah really! Wobble wobble man!"

Early on "FTLT" Darren Kandler b/k/a Klashnekoff makes his opinion of the current scene in London abundantly clear through the satirical skit above mocking the things music buyers say these days. Not only is the person asking "What happened to him man?" ignorant about albums like "Back to the Sagas," he's clearly aping whatever happens to be trendy as opposed to making a truly informed purchase. When Klashnekoff was hot (the listener's past tense not mine) he bought Klashnekoff; now that dubstep is the hot sound he buys dubstep. Klashnekoff is not a rapper about trends though. The fact he'd drop the bar "Back for a +Slice+ like +Kimbo+" on the song "Do It Like" should tell you that, but if not let's make it perfectly that Kah-lash-knee-cough gives a fuck NOT if you don't like his sound or style. He's going to do his own thing, damn the consequences. The album has no shortage of moments telling you to eff the eff off.

The funny thing about that though is it's exactly what I like about Klashnekoff. His ruggedly independent spirit is not only a middle finger to what's trendy in Europe, it's a middle finger to the world as a whole. He's not going to make trap music, or gangster boogie, or bounce, or underground NYC rap, or any other hip-hop style you can come up with for him to do. If sampling Japanese techno funk was in vogue, he'd do the exact opposite. Klashnekoff won't be told what kind of rap artist to be, which means I'm perfectly fine with being told to go take a flying leap, because the result is he'll do a "Let Me Clear My Throat" freestyle in 2012 even though that song hasn't been cool (pun intended) for 16 years and the "900 Number" loop is in fact older than that. What you're getting on "FTLT," an album that purposefully puts a curse word in its title (then censors it), is the raw unvarnished Darren Kandler. He's the guy in the room who is hip because he's NOT trendy.

"Where to begin? It's like I'm near to the end
I fear for my kin, cause 'round here the air's full of sin
Yeahģ a man ain't, hearing a t'ing, they airin the t'ing
The strap bust, the bullets tear through the skin
Yeah the area's grim
A man a down for different various t'ings
You know the road ain't fancy like wearin them rings
Nah it's cold; yeah cuttin like hair when it's trimmed
So fuck fakes, it be those that be dere with a grin
Be the same ones who shank you with a spare in the end"

The Show N Prove produced "Got to Be Right" is the kind of hypnotic instrumental you'd expect to hear Nas spitting bars over, though if one made the argument Nas was making the kind of songs you'd expect to hear Klash rapping over I'd accept it. He's got above the average taste in selecting the beats he'll bless, and "FTLT" is not an exception. It's easy to lose yourself in the grooves as his Carribean-to-Brixton lingual sound carries you over hypnotic backdrops like those of "Match Time," until a line like "get off your ARSE" snaps you back to reality. "FTLT" is the kind of album you could throw darts at and hit dopeness no matter where they land - the stripped down instrumental and bag of crisps crunchy "In At Deep End" complete with NYC classic scratches, the rolling Red Spyda laced "Brand New Day," Beat Butcher's eerie church-like "Dat Time" sounding like a G-Unit song. Even the obvious MC Eiht throwback hip-hop beat bites like "Life in the Bits" from B-Clever are pure pleasure.

Klashnekoff gets not the respect he deserves in the UK nor from the US, which I'd say is a crying shame, but that's what happens in hip-hop in general these days. If you make something ignorant repetitive and banal, it's bound to go straight to the top of the charts and make you a #1 hit on the radio. Klashnekoff so literally could not give a damn about that that he'll flip you off to your face for even suggesting he go pop, and since there are so few people willing to be that ruggedly independent these days I'll give him a pound (or dollar) and say "Thank you man." I don't need Klash to do a pop hit, I need him to tell pop music to smeg off and keep doing his t'ing the way only he can.