Raxstar :: Late on Time :: {self-distributed}
as reviewed by Matt Jost 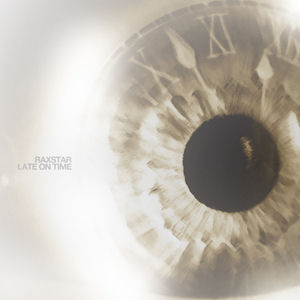 With a moniker straight out of the rap name generator, Raxstar has some convincing rapping to do. But what's first on your agenda these days when you want to research a fresh face? You hit up YouTube. The UK MC has a number of impressive videos to his name. "Name on the Poster," "The Other Man" and "Jaaneman" are all songs that in my opinion belong on an official album, sonically appealing, lyrically engaging, just well produced and visualized rap music with a chance to chart. None of them appear on "Late on Time," though, which is, you guessed it, one of those mixtapes that signalize the artist is waiting on standby.

On the opening title track he doesn't lament his situation but rather looks forward, assuring himself that he "still got love for the music." With lyrics like "You can't stop a star from shinin' / or the sun from risin' / Everybody's gonna get a chance to blow up, you just gotta have the right song and timin'," "Late on Time" delivers the simplistic pep talk today's up-and-coming rappers like to give themselves. And of course once is not enough, so we get the same message in "Journey" and the more forceful version of it in "Hold Your Mouth." Perhaps aware of some juvenile tendencies in his attitude, Raxstar interprets Busta Rhymes' "New York Shit" as "Grown Man Shit," not exactly a new statement either.

Further borrowed beats include Kanye West's "Runaway" and Rick Ross' "Aston Martin Music," two occasions where Raxstar comes across as being really inspired by the music, not merely on the pursuit of popular beats. Joined by RKZ, he represents "Asians in Luton" with flexible flows and ends the official part of "Late on Time" with a markedly higher level of introspection and inspiration over Common's "BE" closer "It's Your World." Notable are Raxstar's rap versions of Mike Posner's "Cooler Than Me" and Martin Solveig's "Hello," making them both his own with detailed and witty writing.

As website SuperCritic ('The Home Of Asian Music') pointed out on the occasion of "Jaaneman," 'the new school of rappers make very specifically targetted, near-formulaic songs where they cater to the female market, don't swear, and make sure their track will get on the radio/TV.' Raxstar takes a few more stabs at such songs. "Ex Games" comes with a video and a spheric Substeppers beat, effectively describing the inner turmoil past relationships can still cause. "Love Crimes" is simply excruciating, Rax ruining whatever he might have to say with crappy imagery ŕ la "Your legs are like a rumour, everybody's tryina spread 'em," all the while picking a skipping beat that has no connection whatsoever to the song itself. He redeems himself with "Creepin," unveiling unexpected storytelling abilities.

Like other British Asian artists, Raxstar is not keen on being pigeonholed into a niche market. Still I'd like to point out that the tracks on "Late on Time" that do feature instruments from the subcontinent stand out, see the sparse tabla drums in "Journey" or the "Chappa Chappa Charkha Chale" sample in The Seminar-produced "The Secret." Ironically, some of the tape's more interesting offerings are listed as bonus tracks and deal with Raxstar's heritage. On "Home" he talks about visiting his family's place of origin over fast breakbeats, for the somber "Aint No Love" producer Sunit samples an Indian tune extensively, while Rax clowns around with fellow South Asian rappers on "Bondh Panga," a Punjabi phrase apparently describing 'a fucked up situation.' Finally he calls to the stand Bob Marley for "Roots," his most serene and mature performance here:

"They gave us false hope, told us we could be a part of this
Kingdom United, when all I'm seein' is fightin'
And I ain't playin' with fire
but it's hard to stay quiet
cause my heart's tired listenin' about these race riots
How you hate someone for colour of skin
when you ain't ever spent a day in shoes that they've been in?
It's hard work convincin' me that you can show sympathy
to someone who looks differently - when you're in the BNP
But you ain't beatin' me, Mister Marley teachin' me
that we are free, so I survive any attempt to weaken me
Music gives power to those who have none
These words inspire hope to those who need some
And I cherish every breath like those of weak lungs
And music is my salvation when I seek some"

At well over 80 minutes playing time, "Late on Time" has no chance holding your attention. As usual, the artist shows promise while simultaneously making the kind of mistakes that cast a shadow over his artistic judgement. As I noted before, Raxstar seems to have been on the right track previously. The purpose of this tape is not exactly clear, but it's hardly a milestone on his path "tryina reach the heights where music pays."