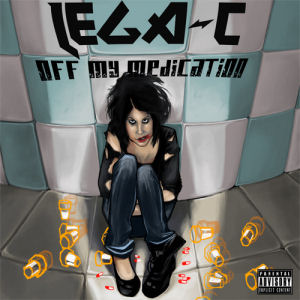 To say Danielle McLean b/k/a Lega-C's life has been full of trials and tribulations would be an understatement. Having two pastors for parents didn't help McLean in her youth - if anything it made her even more rebellious. Perhaps it's a bad stereotype that white girls immerse themselves in black music and culture when they want to piss off mommy and daddy, but that's exactly what she did, and this future YouTube viral sensation was already performing her own rap songs at 10. The thing is that hip-hop COULD have been her salvation back then, but her desire to rap wasn't outpaced by her desire to get into fights at school, get suspended, then get arrested for identity theft while pregnant with her daughter. It may sound like the plot for a Hollywood movie, but this was Lega-C's real life in Tulsa, Oklahoma.

Now if this WAS a movie, we could say "Lega-C cleaned up her life after giving birth to her daughter and lived happily ever after." That didn't happen. The next few years were just as turbulent as her high school days if not worse. While she was trying to get her rap career launched via Swishahouse, she was being victimized by an abusive boyfriend, who eventually got into an armed standoff with the cops. Fearing for her life, she left her daughter in her mother's care and fled to Seattle. This set her music career back at least three years, until she resurfaced in 2011 with the aforementioned viral music video "White Girl Raps Fast." As you can see below, the talent she displayed in this clip was enough to get her a record deal from Block Starz Music.

As it turned out, Lega-C's setbacks actually worked in her favor in a weird way, as she broke out at a time when the "crazy white girl rapper" phenomenon blew up thanks to Kreayshawn and V-Nasty among others. Where she would have been a novelty act in 2006, in 2012 she was part of a hip-hop trend, a movement of outsiders stating their relevancy to their peers and staking their claim to a piece of hip-hop's pie. These girls were no longer the trophy girlfriends of athletes and rappers - or as Lega-C herself puts it herself on track 10 of her album she and her fellow female rappers are a new breed of "Boss Bitch." There's no better time for Lega-C to go nationwide and show everybody that she might be "Off Her Medication" but she's saner than the rest of them.

Now there's no getting over, under or around the fact Lega-C sounds as white as she is, which is why I've gotten the fact that she is out of the way already in this review. Artists are always more than their race anyway, though many times they are a product of their environment, and Lega-C is certainly a product of hers. The one preconception she truly needs to overcome is that she's only "that girl who raps fast," which is where songs like "Blow You Away" featuring KP go a long way toward reshaping her image. After hearing the softly played instrumental, well-paced delivery and personal narrative of the track, the depths of her personality bubble up from beneath the surface and show you that the Tulsa Twista is more than a one trick pony.

"It's my edition, are you listenin, it's kind of strange
I'm so subliminal, how I went got that in your brain
Now that I'm here I'm humbly askin for your attention
I'd be much obliged if you could take a second to listen
And I'm not sayin that I'm God's gift to everything
I'm not suggestin that you need me, you don't need a thing
But if you ever wanted to travel down a different road
Experimental project - hey you never know
It might be cool to hear it from another perspective
From another elective, from a bitch that really could wreck it
Represent the people, the bottom
My spirit led me to you now I'm givin it all I got"

As humble as she is on this track is as hardcore as she is on "That Bitch," a song that seems to take out years of pent up bullying in high school in a straight up Columbine fashion. This is wish fulfillment in hip-hop form, as McLean describes the various forms of punishment she'd inflict on the pretty stuck-up girls who said she was "fat" or a "hoe." Among her other threats in this song: "I'm gonna rip your eyes out and make you cry," "gonna put your face down in the toilet" and "I'm gonna stab this fuckin pencil down your throat." Anybody shocked by this level of anger and violence was probably one of the popular kids or bullies who never saw the level of resentment their behavior engendered.

Lega-C covers a whole range of emotions on "Off My Medication" over the span of 50 minutes, but it's safe to say that there's nothing approaching "sex kitten" or "slutty vixen" among them. While McLean certainly has sex appeal to spare, she'd rather that you get to know her as a rap artist first and then appreciate her whip appeal after the fact. It's not that she doesn't address body issues though - "No Liquor Left" could be as much about alcoholism as bulimia when you read between the lines like "no pain, no gain - I throw it up and look in the mirror - do you like what you see?" Above all she wants you to know she's a "New Sound" and not that same old same you've heard from other female rappers - black, white, or any other ethnicity. I think it's safe to say that she succeeds.