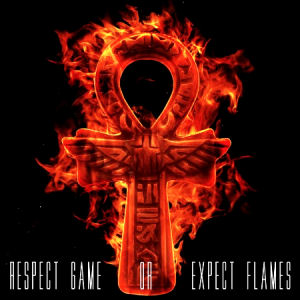 Casual is hands down the hardest member of the Hieroglyphics crew to write reviews about. Certain members of the gang fall into different molds - Del is the avant garde experimentalist, Pep Love is the slept on underground emcee, Souls of Mischief are those kids who formed a cool group you figured would break up someday - and happily they never did. Casual remains an anomaly though because you can't pin him to anything. Is he a great lyricist? Sometimes. Is he the thuggish ruggish member of the group? Sometimes. Is he fearless about trying the unconventional? Sometimes. He's a little of a lot of different things, never all one thing.

Producing legend J. Rawls tries to use that to his advantage in crafting "Respect Game or Expect Flames." Aside from the expectation that various Hieroglyphics members will make cameos, he's got a pretty much blank slate on which to paint. And yes the Hieros are in the mix right from the lead track "Reign" featuring Pep Love and the title track featuring Del, but aside from one song with the Souls later on the rest of the album is wide open. That's why Casual can flip the script with "La Danse Du Fessie," loosely paying homage to the African dance style of Mapouka. The song's name translates to "the dance of the behind," and almost every hip-hop fan should be familiar with a little booty shakin'.

"The only rapper spittin Africa, Senegal
I take the scenic route, y'all too cynical!
Hey, I been in the Bay, and in the May
you'll see infrared polka dots; Kwame smokin pot
Provokin the Oakland cops
Give a fuck if you smoke or not - just live it up!"

The best line in the song may be when Casual boldly proclaims "Ay J, just pause, we don't need a hook/if I just gash they ass, be a sweeter look." J heeds the advice and the track keeps rolling, and you quickly get lost in the rolling melody and clapping claves. Casual's swagger is easily one of his best traits as an emcee, one which well befits his big booming voice. He titles a song "Surely, I'm Right" as thought it was even a question - listening to the track proves otherwise. "I'm from the rap marathon defcon triple six paragon terrordome era" quips Casual, noting his generational gap but still sounding menacing in the process. "Emergency" is a mindfuck that starts out like it's going to be a gentle R&B sample flow until Rawls flips scripts like WHAM BAM THANK YOU MA'AM with a thunderous boom bap. The guest appearance by Kurious makes it that much sweeter, and Casual might be trying to provoke the Cali scene when he opens his verse with "I've never listened to Odd Future/What would Jesus do, would God shoot ya?" HMMMMM.

Whatever Casual decides to jump into on this album, J. Rawls stays with him blow for blow, like the hip-hop version of MMA crosstraining. At one point Cas shows off his cardio by telling the "Craziest Story," another he kickboxes the beat with the cocky "Ain't Tryna Hear" where he schools listeners on how deep his Egyptology is, and if you aren't down with his ground game you're going to "Give Respect" or find yourself tapped out quick. The unquantifiable Casual succeeds on "Respect Game" by being just that, and by branching outside of the traditional Hiero production team, he achieves an updated 2012 sound that fits him like a Sunday morning suit. 20 years in the game hasn't made him old, it has made him BOLD. Get down or get your hazmat fire suit on.