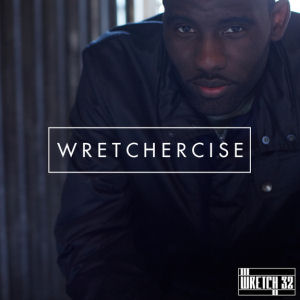 Wretch 32 is kind of a big deal in the UK. He came up in the London grime scene before moving in a more mainstream direction with his 2011 sophomore album, "Black and White." The change in sound worked for him, earning him a million album sales, several hit singles, and numerous awards including BET's Best International Act of 2012. "Wretchercise" is a collection of new tracks and freestyles to hold fans over until he can record a proper follow-up.

Like Tinie Tempah, he makes club-friendly hip-hop that sounds as influenced by American R&B and hip-hop as British grime. The rough edges are smoothed out, the production is crisp and polished, and Wretch's flow is all smooth swagger. He's the kind of rapper who is so casual and effortless that it seems like he's not even trying. The first few times I listened to this mixtape I was ready to write him off as another lightweight artist putting style over substance. It was only after given the mixtape the proper attention that I realized that there is genuine skill beneath Wretch's flossing.

Wretch comes across on this mixtape as an artist who has achieved success and found found out that it isn't all that it is cracked up to be. Money and the things it buys aren't as satisfying as he imagined them to be when he was young and hungry. This is a common realization by people who have fought their whole lives to gain material success; it ends up being a lot less fulfilling than it seemed like it would be from afar.

This being a mixtape there is a tossed-off feel to some of the tracks, and you get the sense that Wretch isn't bringing his A-game to every song. Still, even the tossed-off tracks can be rewarding. Take the opener "Hold Me Back." Sure, it's a two-minute freestyle over an Evian Christ song, but the combination of the spooky beat and Wretch's cocky-yet-melancholy rhymes make for an incredible song. On "My Dreams" he raps over James Blake's "Wilheim Scream," using the haunting instrumental as a backdrop for his romantic raps.

There are also a few certified hits on this mixtape. "Alter Ego" has a Wizzy Wow beat that sounds like a dancier version of "A Milli." Mercston and Kano show up to drop some bars on what is one of the better tracks on the album. The song shows how fruitful the cross-polination between rave/dance culture and hip-hop culture can be.

At his strongest, Wretch 32 manages to combine attitude and confidence with an introspection that hints at deeper emotions without become emo or self-pitying. On tracks like "The Darkest Light" he manages to describe his experience with fame in a way that both revels in the excess of it all while still capturing the disorientation and loneliness of being a young artist. At his worst, Wretch's lines can be too shallow and too tossed-off. Thankfully he hits more often than he misses. I haven't listened to "Black and White," and maybe he spends more of that album on deeper subjects than tour buses and groupies. Either way, I'd like to see Wretch 32 exploring more weighty topics than getting brains and getting wasted. There are more than enough rappers doing the latter already, and Wretch 32 has too much skill to waste it on hedonism. In the meantime, "Wretchercise" is a nice way to catch up with a very promising British rapper.