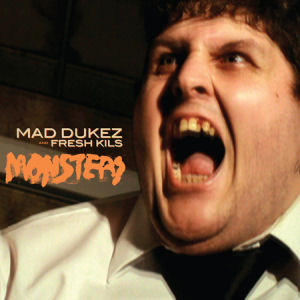 What do you get when one of Toronto's top producers links up with one of Buffalo's fastest rising emcees? You get MONSTERS of course. Before we go any further with this review, let's take a minute to hear from the young Mad Dukez as he explains how he linked up with Fresh Kils to record an album together.

The five song "Monsters" EP is a prelude to a full length effort that Dukez and Kils are working on entitled "Gettin' Gatsby'd," a fact evidenced by the cinematic dialogue opening "Started Small." That album is described by the artists as "a conceptual album paying homage to the roaring twenties" but the key word here is "homage." I don't think any of the flappers of the 1920's danced to beats like these in speakeasies while drinking bathtub gin, and for that I'm glad, because Kils has been and CONTINUES to be on the cutting edge of production. The things he can do with a MPC live have to be seen to be believed, but to get down with "Started Small" all you have to do is listen. The EP itself seems more inspired by Halloween than 1920's socialites, not just because of the title but because the accompanying artwork has someone who looks like Andy Milonakis unleashing a blood-curdiling scream. Don't be scared homey. Dukez is a humble and thoughtful artist who lets his feelings be known on songs like "Maddist Anthem." Overcoming the doubters is a theme for Dukez as he found "a little resistance/as I started the imprint" but nonetheless was able to achieve his dreams. Kils merges boom bap with big bass bottom on tracks like "Stupid Hard," a song Dukez often uses to close out his live sets due to the energetic vibe. Dukez brings out his inner braggart over the boom and pound: "Money like Republicans/freer than a Democrat [...] I see pussy, youse a thundercat/Countin up the dollars, fillin up a duffel bag." It doesn't cut the razor's edge of hip-hop, but it's undeniably head-nodding. For Mad Dukez, who has been working his way up from Buffalo to the big time for a minute, there's few better ways to go than link up with some Canadian acts considering the relatively short distance he has to travel to link up with the freshest (pun intended). For only $5 this album sets the right tone musically and keeps your interest for the relatively quick 18 minute length, which by my estimation means that the full length "Gatsby'd" album is something to keep an eye out for.