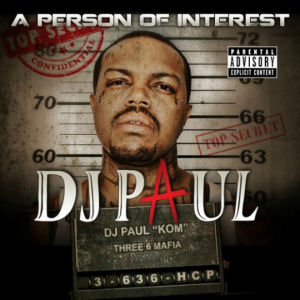 Anybody who thought Scale-A-Ton was a weighty album in 2009 with 20 tracks, the co-founding member of Three 6 Mafia has upped the ante in a BIG way. 2012's "A Person of Interest" is nearly 20 minutes longer than his last solo album, and if you buy the physical version

you ALSO get a bonus DVD with what the sticker on the cover describes as a "comedy/horror movie" and "never before seen cooking videos." Cooking videos?! If that comes as a surprise you haven't been checking out his YouTube videos, like the one below where he shows you how to make a barbecue style SMOKED pizza.

He's quite the gourmand when it comes to cooking, which is why he and Juicy J ultimately appeared on the limited run VH1 series "Famous Food." That experience left me wondering why the Cooking Channel never tried to get him for another short series, or even a one-off special about Memphis barbecue. Regardless DJ Paul is nothing if not chronically busy - he's recording, he's filming videos for YouTube, he's putting out massive 80 minute albums like "A Person of Interest" and filming his own movies - all on a D.I.Y. level with Select-O-Hits doing the distribution. All of this might make you wonder what the future is for Triple Six, and the best I can tell you right now is "on hiatus." J doesn't make a single cameo on this album, and in fact he's busy with his own solo career, having recently hit the charts with his crossover single "Bandz a Make Her Dance

No matter what the future holds for Three 6 Mafia, you have to respect Paul Beauregard's hustle (and that of J) and the fact he's willing to give so much material to a still down and loyal fanbase. He's also the producer of record for every song on his new album, which only adds to the amount of work on his plate, although co-production credits can be found on every song other than intro, outro and song "Unstoppable." His top four collaborators are Shawty Trap, Premo Danger, Gtown Vega and Dream Drumz - the latter of which will already be familiar to many of this review's readers for the single "W.I.L.L. (What I Look Like)" featuring Gucci Mane.

DJ Paul has never been known as one of the greatest lyricists in the South, let alone hip-hop as a whole, but rapping verses with the mushmouth nothing-to-say Gucci Mane elevates him to Common or Nas by comparison. In fact the only guest on the album who can really hang with him (and the only other noteworthy one to mention) is Lil Wyte on the song "I'm Sprung," which at least answers the question of whether the two are still comrades and collaborators with an affirmative YES. DJ Paul fans have always expected two things from him whether collectively or as a soloist - hard thumping beats and unrepentantly gangsterish rhymes. Songs like "Get 'Em Done" deliver both.

"Do this shit like right, now, walk up to his house
Knock up on his do', drag his ass out
(Ass out) Nigga shouldn'ta been runnin mouth...
I don't run, let these guns get 'em done
[...]
Pow pow no witnesses, bustin at you bitches
Nigga tryin me he gon' get tried like a defendant"

The most surprising thing about "A Person of Interest" may be what WASN'T included on this lengthy album. Despite releasing what he called a "dub-hop" song called "Cocky" over ten months ago, the song is nowhere to be found on this disc or any version that has bonus tracks (yes believe it or not the iTunes download is LONGER than 80 minutes). I'm personally disappointed since I thought it was a fresh new direction for Paul and I found the song's hook hypnotically addictive. You also can't find his recent remix with Busta Rhymes of "I Can't Take It" on here even though it would have been a worthwhile inclusion that also would have upped the star quotient of this album. In fact even though I often say rappers have too many guest stars and lose the limelight on their own CD, with this much music and the boisterousness of DJ Paul's delivery he almost certainly couldn't be surplanted on "A Person of Interest" so more variety wouldn't have hurt. For the dyed-in-the-wool Three 6 Mafia fans this is a must have, for more casual fans it may be just a bit too much.