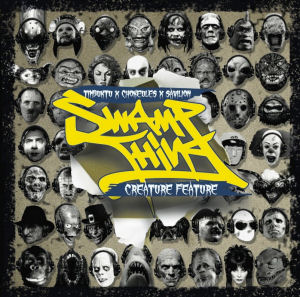 Timbuktu, Chokeules and Savillion are hip-hop's latest supergroup, coming together under the moniker Swamp Thing, but they're not from Okefenokee. In fact Canada is not a place I normally associate with brackish waters, though Wikipedia claims there's a bog or two to be found there. That being the case, I sincerely doubt any of them are in Toronto, although there are plenty of movie theaters and hip-hop clubs. Somewhere at the intersection of the two is this group's inspiration, as their bio unapologetically claims they are fans of "good rap and bad b-movies," and this "Swamp Thing" clip would certainly fit comfortable into the latter half.

I can only believe most boys my age back then would go just to see Adrienne Barbeau, a sexpot star of horror and science fiction films, and not because DC Comics fans expected an accurate portrayal. The film has achieved a certain level of cult classic status regardless, and undoubtedly this Toronto trio would like "Creature Feature" to achieve the same level. They don't necessarily expect this 13 track album to be a commercial success on the level of "E.T.," but they'd be happy with the profitability of your average "Toxic Avenger" flick - not to mention the amount of devotees that Troma has. It's not hard to picture them getting it right from the start on "123," a song which embraces b-movies the same way Mystery Science Theater lampooned them - with an affection for just how goofy it all is. "What's that sound? Look it got disgustin again
Cause no more fuckin with the sound of Sav, Choke and Tim
It goes one, two, three - and a million
Timbuktu, Chokeules and Savillion
[...]
Relax out smokin a bag
Collectin records 'til they put my fuckin toe in a tag
Flow on some rag, bloodied up, period shit
I'm on some Eddie Murphy, +Delirious+ shit"

"Creature Feature" is peppered with monster movie clips and dialogue throughout, and songs continually pay tribute to the theme by both title and lyrics. "B-Movie Monsters" is a stomping Godzilla of a rap track, bragging about "experiments gone awry" that are "energized with the lightning like I'm Frankenstein." It's actually a common mistake to confuse Frankenstein for Frankenstein's MONSTER but I enjoy the beat and the samples scratched into the hook - Busta Rhymes and Method Man among others - so I'm gonna let it slide. The reference to "Creature From the Black Lagoon" was a nice touch too, as are all the shoutouts to H.G. Wells on "Time Machine Massacre." It's not all fantastic flicks though as "Reefer Vendetta" makes the odd but successful choice of sampling "Leave it to Beaver" for its raps.

If you're familiar with the Canadian hip-hop scene, then the list of guest stars on this album won't surprise you - Ghettosocks on "The Damned," Wordburglar on "John Carpenter" and so on. Savillion provides all the production, and Uncle Fester provides all of the cuts. This is mostly successful for 48 minutes, although occasional songs like "All About the Brains" and "Red Planet" feel a little too much like Slaughterhouse and could probably pass for one of their albums if you weren't listening closely. I could honestly hear Joe Budden and Royce Da 5'9" freestyling over either with no problem. To make a long story short though, while "Creature Feature" doesn't blow me out of the water, it doesn't do anything to make me want to turn it off or change the channel to another monster movie. The theme is fine, the album doesn't break new ground, but this group has an overall enjoyable chemistry. It's worth a listen.