The Gaslamp Killer :: Breakthrough :: Brainfeeder
as reviewed by Patrick Taylor 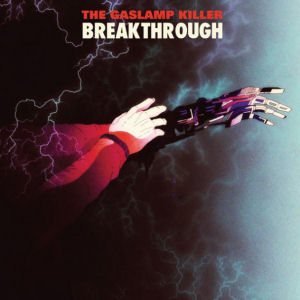 William "Gaslamp Killer" Bensussen's stage name comes from San Diego's Gaslamp Quarter. For those who have never been to San Diego, the Gaslamp Quarter is the historic downtown that is home to many of the city's nightclubs, mostly of a slightly frat boy variety. As a young DJ, Bensussen had a penchant for clearing dance floors with his sets, hence the monicker "The Gaslamp Killer." His solution for addressing his reputation for killing the vibe at clubs wasn't to change his set list, but to find venues with a vibe more suited to his particular brand of music. He moved to L.A. and hooked up with the Low End Theory, the weekly experimental hip-hop party, joining the likes of Flying Lotus, Nocando, and Nosaj Thing. He's released several E.P.s and mix CDs, and also worked with Gonjasufi. "Breakthrough," his debut, was released on Flying Lotus's Brainfeeder label.

The Gaslamp Killer's sound is hard to describe. "Experimental hip-hop" is probably the best description, but only because it is vague. He mixes in acoustic instruments, Middle Eastern music, booming drums, electronica, glitch, and noise. There are elements of rock, hip-hop, avant-garde composition, and whatever the hell it is Gonjasufi does, all mashed together in a bewildering mess.

He's at his strongest, or at least most listenable, when he's making straight up beats. "Critics" mixes Middle Eastern strings and reverbed guitar over pounding drums, and the result is spooky but banging. "Dead Vets" is a slice of psychedelia that could be an uncovered Sri Lankan 45 from the late sixties. "Nissim" layers some heavy hip-hop drums over Indian sitar and tables.

He also likes to bring the noise. The single "Flange Face" is all operatic bombast, Orff's "Carmina Burana" with a healthy dose of electronic distortion. "Impulse" sounds like some sort of new government torture technique: imagine being chained to a bed and forced to listen to it at maximum volume for 48 hours straight. Album closer "In the Dark" adds electro bass to its Middle Eastern instrumentation, and has an exotic heaviness similar to Led Zepplin's "Kashmir."

He also gets plain weird on several tracks. "Mother" features a clip of a mother talking about her son's love of music as a child over a groovy sixties instrumental; "Fuck" plays a clip of what sounds like an educational video from the 70s describing the many uses of that word; and "Apparitions" and "Veins" both feature Gonjasufi's croaking voice.

While "Breakthrough" has its discordant and frankly annoying moments, on a whole it manages to be trippy and banging at the same time. The Gaslamp Killer finds a nice mix between hard-hitting drums and esoteric instrumentation. I'm not sure what kind of breakthrough he's hoping this album will be: it's guaranteed to bum out the fratboy crowds of his old stomping grounds, and it certainly isn't going to put him at the top of the pop charts. As a fan of his early E.P.s and work with Gonjasufi, I was pleased to see what he was able to do with his very own full-length. It's about as weird and wonderful as you'd expect from a guy who looks like he's been living on a commune for the past ten years.