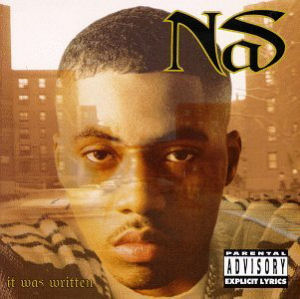 "It Was Written" is one of rap's most difficult albums, not because of the album it is but expressly because of the album it isn't. There are three stages of grief with "It Was Written": first, despondence that rap's greatest debutante took an undeniable step backward; second, genuine appreciation for the good album it is; and third, reconciliation via a widely varying middle ground. One of the drivers behind rap's sophomore slump cliché, it's the album where Nasty Nas, he of the tech on the dresser, is replaced by Escobar, an unformed mafioso thrust upon Nas following his overwhelmingly successful turns on "Doe or Die," "Only Built 4 Cuban Linx...," and "The Infamous":

"Fake thug, no love, you get the slug, CB4 +Gusto+
Your luck low, I didn't know 'til I was drunk though
You freak niggas played out, get fucked and ate out
Prostitute turned bitch, I got the gauge out
Ninety-six ways I made out, Montana way
The good F-E-L-L-A, verbal AK spray
Dipped attaché, jump out the Range, empty out the ashtray
A glass of 'Ze make a mad Cassius Clay
Red dot plots, murder schemes, thirty-two shot guns
Regulate with my dunns, seventeen rocks gleam from one ring
Yo let me let y'all niggas know one thing
There's one life, one love, so there can only be one king"

"Illmatic" is often called rap's Bible, but if we're dealing strictly in the literal sense, "It Was Written" more closely resembles the good book. If "Illmatic" is a biography, "It Was Written" is an oral history synthesizing stone-faced parables and cautionary tales, kings dethroned and civilians made dons. Unlike those of "One Love" and "2nd Childhood," Nas's characters here are faceless and calculating, lending his narratives the air of news reports rather than memoirs. The set pieces, however, are vivid and well developed, and the drama is effectively conveyed in blunt, cinematic bleakness:

"My mindset, son got wet, I'm vexed really
They snatched off his Rolex, smacked his bitch silly
Why niggas actin' illy, word to Will, he 'bout to feel it
I feel it, he shoulda been dealt wit' it
Them niggas sour, they put too much flour in their coke
And got the nerve to wonder why they broke
While we was gleamin', niggas was schemin', seen the ill Beamers beamin'
Triple-beam and doublin' cream, had 'em feenin'
To get their fingers on the dough-sa, I called Sosa
Sosa, these niggas hit the God, bring the toaster
Meet me in the 'Bridge I'm 'bout to go loca
Left my rat beggin' me to stay and stroke her"

From a purely technical perspective, Nas's performance on "It Was Written" is at least as good as on "Illmatic." His rhymes spew forth in flawless cadences with nary a syllable out of place. Early standouts "The Message," "Street Dreams," and "Take It In Blood" are technical triumphs of the utmost, and the posse cut "Affirmative Action" is a standard of the mafioso subgenre despite its reliance on allusion over plot. However, the equivalences with "Illmatic" essentially start and end there: the wordplay is rarely as sharp, the hooks generally unimaginative, the insight hardly as poignant, and the narrations seldom hitting so close to home.

"It Was Written" is, of course, where Nas made the much-maligned decision to employ the labor of the Trackmasters, themselves on a layover somewhere between "Mr. Smith" and "Big Willie Style." While ostensibly this move would position him for crossover appeal, nothing here even sounds like a potential chart-topper, and their productions are notably lean, if not spare. Among them the moody funk of "Watch Dem Niggas" with Foxy Brown particularly stands out, but the rest of the album's inner section comprises a mixed bag. "I Gave You Power" is a tired concept record not nearly as good as those in his latter catalog, the boring Dr. Dre track "Nas Is Coming" underwhelms, and "Black Girl Lost" is a thoroughly middling stab at consciousness amid an hour's worth of extortion, chases, and shot-callers.

The suite of narrative tracks on the album's second half, including "The Set Up," "Suspect," "Shootouts," and "Live Nigga Rap," take heavy cues from the concurrent Mobb Deep records, with Havoc even producing "The Set Up" and "Live Nigga Rap" and both he and Prodigy contributing vocals to the latter. While each strong songs in their own rights, it's difficult to overlook that none would likely have made the cut on "The Infamous." The classic closer "If I Ruled the World," the hit single featuring Lauryn Hill, stands in stark contrast to the rest of the album as an enlightened moment of clarity. Over three stunning verses delivered upon a slightly doctored Whodini standard, Nas calls for solidarity amid a semi-apocalyptic landscape. Even Ms. Hill's inescapable hook provides effective contradiction to Nas's austere prophecies, and it's an undeniable hip hop classic, both on its own and for the way that it counteracts, belittles, and places in perspective the narratives of now seemingly petty crime that precede it:

"Cause you could have all the chips, be poor or rich
Still nobody want a nigga having shit
If I ruled the world and everything in it, sky's the limit
I push a Q-four-five Infinit'
It wouldn't be no such thing as jealousies or B felonies
Strictly living longevity to the destiny
I thought I'd never see but reality struck
Better find out before your time's out, what the fuck?"

"It Was Written" is a necessary transitional record for Nas, albeit one with some truly great material, and ironically it remains his bestseller. It bears the first signs of an identity crisis which prevented him from the consistency of Scarface and Ghostface but also liberated him from the crippling redundancy of Mobb Deep, AZ, and Raekwon. Going forward Nas increasingly retreated, for better or worse, to the inoffensive music of Salaam Remi and L.E.S. Something had to follow "Illmatic," and while it was initially decried for its lack of profundity and vision, listeners have pined for such rawness and authenticity from Nas ever since. It has aged far better than its successor "I Am...," an album which now wears every one of its fourteen years and then some, and while it lacks the riveting chip on its shoulder of "Stillmatic," the mature introspection of "Street's Disciple," the sleek polish of "Hip Hop Is Dead," and the deliberate sense of purpose of "Untitled," many listeners prefer it to all of the aforementioned. Perhaps above all else, "It Was Written" is an embodiment of what is perhaps the album's greatest truism: a thug changes, and love changes, and best friends become strangers.