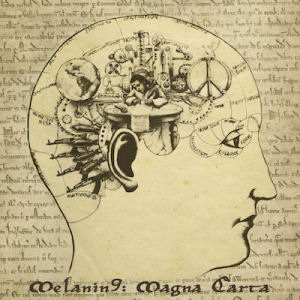 Yes, UK appreciation month was October, but I think it goes without saying that our blokes across the pond deserve to get some shine more than just one month out of the year. Melanin 9 is a rapper from the UK, but unlike most of the "brit hop" I'm familiar with, his style is heavily influenced from the states. Melanin 9's debut album, "Magna Carta" serves a heavy dosage of mid-90s, East Coast-influenced production; even M9's vocal delivery is more reminiscent of a MF Doom rather than Mike Skinner (my personal favorite British rapper).

Not to say M9 disowns the UK and wishes he was trading bars in a cipher somewhere in Brooklyn, in fact it's quite the opposite. Much of "Magna Carta's" lyrical content covers what life is like in the United Kingdom. Melanin 9 juggles duties as an emcee and a spoken word poet over "It Was Written" era production from the likes of Anatomy, Parental, Tony Mahoney, and others. While everything is in order for "Magna Carta" to be a successful record, its main fault is that Melanin 9 struggles in being engaging to the listener.

"Magna Carta" has 14 tracks and clocks in at just under 58 minutes, but it's a record that tends to drag despite its average amount of tracks/run time. M9 is a skilled wordsmith, he pairs together syllables that work well together, and the things he raps about are of social importance – all qualities of a good rapper. But simply saying dope shit, isn't enough to capture an audience. There are a hand full of stand out cuts, like "Landslide," which has an excellent Primo-esque beat. And the smoothed out "Love Stencil" and the dark "Heartless Island," both of which have some of the only memorable hooks on the album and bring in guest features that breathe in some additional life in the tracks.

There certainly is a market for this album. Frankly I'm just not a part of it. There are several hip hop heads who will snap their necks, bopping their heads to the dusty, nostalgic (or perhaps dated) boom bap beats. The biggest feature on "Magna Carta" is Roc Marciano. This guest spot makes a lot of sense, not only in the vein that it will give M9 some US blog love, but it almost seems as if M9 in Roc Marci's UK counterpoint. The two are both in love with that East Coast 90s-style production, both are skilled lyricists, and both have sleepy deliveries. I, for one, have never been able to get into Roc Marci outside of a few tracks (I do think he and M9's "White Russian" is one of the better cuts on the album), which I think is why most of "Magna Carta" does not move me much. There aren't really any tracks on the record that I would categorize as "bad," but there is a substantial amount of content on the album that leaves me with a feeling of indifference.