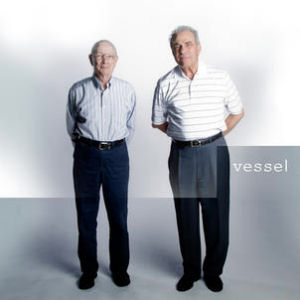 Columbus, Ohio duo, Twenty One Pilots (sometimes stylized twenty | one | pilots) is gearing up to have a huge 2013. Already dubbed as "One of MTV's Artists To Watch in 2013," the genre-defying band is looking to take their debut album "Vessels" on the road, with shows from Bowling Green, Ohio all the way to Japan. Twenty One Pilots consists of rapper/singer Tyler Joseph and drummer Josh Dun, and they dabble in genres spanning from hardcore rock, to hip hop, to EDM to full fledged pop music.

Generally Twenty One Pilots is probably not the type of music that we would cover here on RapReviews.com, but it's January so we don't get a lot of exciting new releases, and this album is one of the most intriguing records I've heard in a while. They sound like if Passion Pit, Fall Out Boy and K'Naan had a three way, and somehow conceived a musical child. There are countless bands out there who do this whole post-modern, "our genre is all genre" type of music, but very few pull it off as effortlessly and seamlessly as Twenty One Pilots.

The star of "Vessels" is front-man Tyler Joseph who juggles singing and rapping throughout the course of the record, and manages to do both pretty well. He's a better singer than rapper, mainly because his rapping voice is a bit grating (he sounds a lot like K'Naan), but he has a strong flow and impressive rhyme schemes. His main talent is writing, with "Car Radio" being one of the strongest examples on the record. On the track, he raps about his car radio being stolen, so he sits in silence while his mind wonders over a sparse piano beat. "Migraine" and "Guns for Hands" are other stand out cuts, which feature strong metaphors.

Overall "Vessels" is one of 2013's first great records. The only issue facing these talented young musicians is a limited fan base. Limited may be the wrong word, because they definitely appeal to the college crowd and the type of music fans who've recently made Macklemore & Ryan Lewis stars, so I definitely won't be surprised if their music takes off this year. But this is definitely rap music for non-rap fans, so many hip hop purists will dismiss this record (as will many purists of other genres). The "indie rock" crowd will already welcome tracks like "Fake You Out," but there are definitely songs on this record that will alienate them on here too. "Vessels" is a little bit for everybody, which is both a gift and a curse.