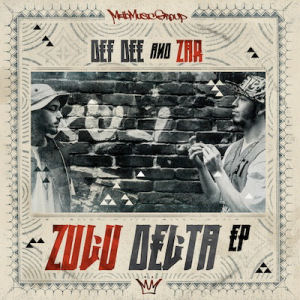 Hailing from the Pacific Northwest, the Maritimes, Emerald City or whatever descriptive you like is the tag team of Def Dee & Zar. Dee's the producer, Zar is the rapper, and according to the latter "This EP was intended to show that there still exists classic lyricists." At least he's not lacking in confidence, which is probably helpful given they are giving this album away, a move that often unintentionally makes people suspicious about the quality. Fortunately credibility is provided courtesy of Mello Music Group, home to some of the best releases of 2012. You know - albums like "Dice Game and "Trophies" just to name two. MMG tends not to fuck with whack shit that much - unless you're confusing them with Maybach Music. I kid, I kid. I'm glad Rozay survived that driveby - that shit was pretty fucked up.

ANYWAY as indicated by Zar earlier in this review, "Zulu Delta" is a EP release, which means we're only talking about 7 tracks total. Out of those 7 one is an intro by "Craig aka Tiny" so in terms of actual songs we're down to 6 - and that clocks in at a combined total of 16 minutes. There aren't just short songs - they're miniature. The longest is "Same Old" featuring Sydney Ranee, and that clocks in at 3:14. "Hadouken" proves it's not the size though, it's how you use it. Set off with samples of Keith Murray and Ghostface Killah, the bass and breezy pianos get things going nicely by the time Zar starts to spit:

"Superhuman, within the airwaves of pollution
Shit! They spoonfeedin' themselves deluded loops of confusion
Audio illusions get muted
As I shift the movement, congruent
And hieroglyphic embodies the fluent, gat in hand
Thinkin I'm my favorite brand - +Just Do It+"

Zar is an on-beat, off-beat freeform spitter with a stream-of-consciousness style delivery. Dee has a sense of humor in his production, complete with complimenting Zar's line "lights up, pipe down" with a Super Mario sample. The style borders on experimental and cutting edge at times, such as on the track "I Ain't Playin'," which takes a half minute to get to the rap and is punctuated by layered instruments and sounds more like a horror movie or TV drama - but it's actually quite head-nodding. "About It" is the exact opposite - it's almost a pure throwback to vintage 1980's funk and breaks. The only downside is that it's a little noisy and Zar is hard to hear.

To get right down to the point "Zulu Delta" is a free EP worth your time, which shows the potential of both people in question, but it's also a little rough around the edges and shows that for this Seattle tandem to shine they could use a little more polish. Zar could focus his raps a little more into topics and be a little less freewheeling, Dee could take his good production and make sure it stays EQ'd with Zar's raps, and both could develop some longer concepts that would give them the chance to flesh out meaningful ideas. It's a good start though - a learning experience for them both.