:: Virgin/I.R.S./Regal
as reviewed by Grant Jones 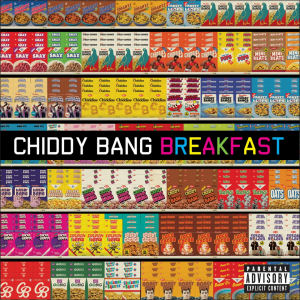 Genre snobbery is something that I have been guilty of many times as a hip hop fan. Over the last 10 years I have drifted more and more towards underground hip hop, as mainstream artists implement electronic and dance in to their music creating hybrid artists such as Nicki Minaj and Tinie Tempah. This isn't a bad thing of course, hell I enjoyed the majority of "Pink Friday", but whilst radio stations eat up catchy pop hits (and I will happily listen to if it's on) I would rather have some traditional hip hop on my mp3 whilst riding the bus. Chiddy Bang is two guys; Chidera "Chiddy" Anamege and producer Noah "Xaphoon Jones" Bersin. They have been building a fanbase online for the past few years with their friendly combination of electro-rap and catchy pop. "Breakfast" is the culmination of this, a record designed to have something for everyone.

Chiddy isn't a bad rapper, in fact he reminds me of Blu in tone and delivery albeit lacking the refined flow. It's just the whole Gym Class Heroes vibe running throughout "Breakfast" that sees the album rarely venturing from hook-dominated, safe pop-rap. "Mind Your Manners" is innocent chart-fodder, dominated by Icona Pop's chorus that sounds like a group of 8-year old girls singing in the playground. And that is exactly the audience I expect to be eating up "Breakfast". Pop fans that enjoy a bit of rap will find all they need – catchy hooks, simple production and sing-along raps. "Ray Charles" is a gospel-infused single that helped Chiddy Bang make numerous fans across the web in 2012. Admittedly it is a likeable track, sounding like I imagine Jurassic 5 would if they eventually reunited. The issue I have is the frequent "I'm Ray Charles" statements from Chiddy. I know he isn't actually comparing himself to the legendary singer, but making a catchy hook to get people singing "I'm Ray Charles" just comes off odd. "Run It Back" demonstrates Chiddy's inability to ride a beat, as a scrappy drum pattern clashes with an 80s video game. The R&B crooning that breaks up the rap is the only saving grace but ultimately feels like a poor Drake knock-off. The infatuation with games continues to better effect on "Baby Roulette", a melodic collision of MIDI sound effects that tie in nicely with sex metaphors:

"Like damn, could we do this every weekend?
The baddest chicks on campus, I need
And I don't hate the women, so I'm prepared for love
But if we make it then of course I'm gonna wear a glove
I'm your savior, I'ma text you when I can
She falling for me, so I'm gonna catch her when I can
And when I call you we back on, loving you with the strap on
A bald head in the winter, I keeps my hat on"

Lyrically Chiddy Bang isn't going to drop any jaws, with limited vocabulary and basic rhyme schemes (as well as a stupid name) Chiddy will likely be chastised by many emcees. As much as I want to knock "Breakfast", it isn't designed to be studied. The rhymes are there to complement the accessible production, which unfortunately is only executed to great effect on a few tracks. "Baby Roulette" and "Ray Charles" are fine pieces of pop with worthy raps, but the rest of "Breakfast" doesn't really bring much of interest to the table. It's average radio-friendly hip hop and unfortunately for this reviewer, adding competent raps over pop may be what's hot right now, but "Breakfast" won't satisfy your appetite for actual hip hop.