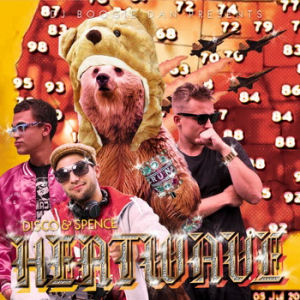 Disco and Spence represent just how global hip-hop has become. They are from Austin, Texas, but have spent time in Berlin, Germany. It was there that they met up with DJ Boogie Dan, the host of this EP. Their style pays homage to Southern rap (and not just in the jokey Pen and Pixel cover art), but also contains elements of dance music. Given Berlin's place in the dance music scene, it stands to reason that DJ Boogie Dan may have helped Disco and Spence go in a more dance-oriented direction. From what I can tell, Spence handles the production and adds some verses while Disco takes on the lion share of rhymes.

The album opens with an instrumental intro, which may not have been totally necessary given that it is an eight-song EP. It then goes into "She Wants to Dance," a forgettable song about a girl who wants to dance. The 80s beat is ok, but the rhyming is flat and the hook sounds like it was done by the Flight of the Conchords.

"Zip-Loc" is a much better effort. The beat hits hard with rumbling bass, heavy 808s, and snare snaps. Disco and Spence's rapping isn't stellar, but the banging beat compensates for any flatness in their delivery. The "Rack City" freestyle "Half Full" is another solid effort, with the beat once again making up for the shortcomings of the rhymes. "Separation Anxiety" is the most personal track on the album. Over the "Donald Trump" beat, Disco spits some love raps, telling his lady "you got me like a seizure." The album closes with "Ride Slow," which is undone by clunky rhymes and cheesy synthesized horns.

The rapping is a consistent issue on the album. Of the two, Disco is the better rapper, but his delivery is often flat and off-key. His partner is even less skilled on the mic. The end result sounds amateurish and lacking energy, as if were recorded in their bedroom at 7am without so much as a cup of coffee to hype them up.

While "Zip-Loc" is a decent track, there isn't much else on "Heatwave" that warrants your time or makes it stand out from the hundreds of other rap EPs released each month. Props to Disco and Spence for doing what they are doing, and good on them if they've found an audience for their take on hip-hop. Unfortunately I can't count myself as a fan.