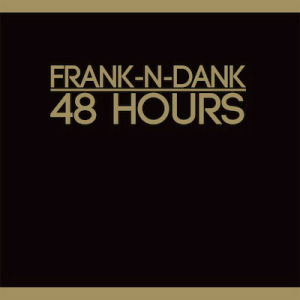 J Dilla month continues here at RapReviews.com with a long-overdue album from Frank N Dank. That's not to say the album was never released though, because a bootleg version escaped from the MCA Records coffers in 2003, a fact that is referenced in this 2004 review. Nevertheless the lack of official explanation for MCA's failure to put out a J Dilla produced project led to the kind of rampant speculation the internet specializes in. Prevalent theories included the following:

1.) J Dilla used too many samples and MCA wouldn't pay the clearance.
2.) Frank N Dank didn't come up with any pop radio-friendly rap songs.
3.) Dilla himself was unhappy with the project and asked MCA to shelve it.

Frank Bush a/k/a Frank Nitt (originally Frank Nitty) insists that all of these theories are dead wrong. In a press release accompanying the release of "48 Hours" he deads the rumors in a very matter of fact statement: "This is the exact version of 48 Hours that we (Frank N Dank & Dilla) turned in to MCA and the way Dilla intended it to be!" So why didn't it come out? According to Frank it was simply a matter of turnover at MCA, with the same A&R people who greenlit the project no longer around to push it along when the album was done. That's certainly plausible and has definitely happened to rappers in the past, though Q-Tip's famous Industry Rule #4,080 still makes any excuse feel suspect even if it turns out to be totally legitimate. I fully expect people to believe the conspiracy theories about "48 Hours" being in limbo for a decade even after this review and don't blame them if they do.

The upshot of the whole thing is that this album's significance looms larger after Dilla's passing than it ever would have while he was alive. It's even fair to say that Frank-N-Dank would have remained relatively unknown outside Detroit were it not for Dilla's friendship and frequent collaborations in the 1990's and early 2000's. To that end Dilla's presence in their lives is spotlighted in an accompanying instrumental disc if you cop the physical, which unfortunately I don't have since I got the digital from their publicist. This means I also lack liner notes to confirm all of the tracks ARE by Jay Dee, but I'm going to take Frank Nitt's statements to the effect that it was at face value. It was only the "Xtended Play" follow-up that disappointed fans, having only 3 Dilla tracks in total.

As for lyricism, Dilla only contributes vocally to one track, that being the album's longest song "Keep It Coming." The idea there are no radio friendly songs is easily shot down by the drinking and clubbing anthem "Where the Parties At?" Frank N Dank definitely enjoy the visceral pleasures in life as evidenced by "Sex on the Beach," and indeed if you were going to knock them for anything it might be that neither rapper is particularly profound.

"Yo - stop, wait a minute - the story just began
When the thang was exposed, Frank was walkin in
Just in time to see the ass out, baby's a glass house
Lil' high, lil' drunk, now how in the fuck did she pass out?"

Yup - it doesn't get any deeper than "taking this broad to the brink/got her one leg up, bent over the sink" on this song. That's the story of the entire album. Song titles are remarkably self-explanatory. "Marijuana" is about getting high, "Y'all Don't Want It" is a typical braggart's rap, and "Afterparty" is about not letting the night end. It's actually a damn good thing tracks like the latter feature Dilla's unconventional electronic production, because it takes something of marginal importance and turns it into something worth listening to. Dilla + Frank N Dank = interesting Detroit party rap. Frank N Dank - Dilla = something I probably wouldn't bother with. That's not to say Frank and his cohort Dank aren't capable of all the rudimentary aspects of emceeing - their breath control, diction and vocal tone are all solid - but there's nothing overly compelling to their wordplay, nothing that makes their voices stand out as unique, no punchlines that slapped me hard in the funny bone. "48 Hours" is historically important to Dilla fans and collectors but otherwise strikes me as being just barely above average.