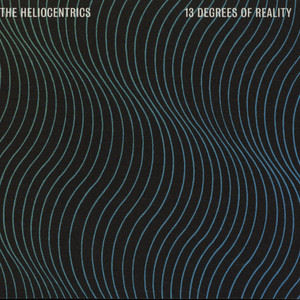 Heliocentrics are a project of Malcom Catto, a drummer who has worked with DJ Shadow, Mr. Chop, J. Rocc, and Madlib. The band combines funk, world music, and avant-garde jazz. Their name is a reference to jazz weirdo-auteur Sun Ra's "Heliocentric Worlds" albums. For those unfamiliar with Sun Ra, he claimed to be from Saturn and made a series of avant-garde jazz albums from the sixties through the 80s, exploring electronic music and free jazz in the process. Heliocentrics' debut album came out in 2007, followed by a remix album and several EPs. "13 Degrees of Reality" is their proper sophomore album, three years in the making and is available now via Now Again's digital subscription.

Where "Out There" explored hip-hop and funk through a jazz lens, "13 Degrees of Reality" goes in a much darker direction. The songs are still grounded in Catto's backbeat, but the band goes for the slow burn more than immediate gratification. The first single they released is "Wrecking Ball," which clocks in at 7'44." It begins with a minute of feedback before the bass and drums kick in. Catto and bassist Jake Ferguson keep things simmering while the keyboard and guitar keep the sparse melody. Many of the songs follow this template: drum and bass holding a slow, funky backbeat, keeping things at a sinister drone. There aren't many strong melodies or uptempo tracks, with the exception of the Southern funk workout "Mr. Owusu I Presume." Instead, the album is punctuated with free jazz exercises, acid freak outs, and a lot of dark grooves. Heliocentrics seem more intent on opening up your consciousness than in moving your ass. This is music for a drug trip, not the dance floor.

Opener "Feedback (Intro)" offers squeals of feedback and saxophone skronks over a steady beat. "Ethnicity" gets into some of the world instruments that are fitting for a band that has worked with Ethiopian musician Mulatu Astatke. In fact, "Collateral Damage" could have been on the soundtrack of an Ethiopian crime movie from the seventies. Songs like "Freeness Part 2" and "Descarga Electronica" are more interesting than enjoyable, unless dissonance is your thing. The whole thing ends with the epic "Vibrations of a Fallen Angel Edit (Outro)," which combines guitars, sitars, and a whole mess of other things into a concoction that wouldn't have been out of place in the summer of love.

While a few more uptempo songs would have been appreciated, "13 Degrees of Reality" is still a solid album. Catto and Ferguson provide a funky foundation for the band's experimental meanderings, making it an album that can get your head nodding and your mind moving.