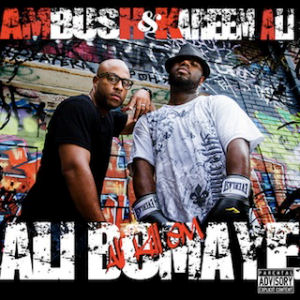 Kareem Ali and Ambush don't set the record for lack of information included with an album for review. I have at times received a single CD-R in a sleeve with the artist's name and album title written on the CD itself with a marker, with no insert for the artist's bio or even a URL to find out more about them online. "Ali Bomaye" is better than that to a small degree. It comes in an actual CD case, although it's one of the thinnest I've ever seen, with actual artwork front and back that does include websites where you can learn more about them. I would have considered the industry standard "one sheet" about them a plus though, and there's something not quite right about the disc in the case itself. My MacBook was queasy about it from the get-go, and by track 5 out of 12 my CD drive was making noises like a wheezy asthmatic dying from a lack of oxygen. "My MacBook isn't a spring chicken, so maybe this CD will rip better with Windows Media Player." In fact this CD stopped reading and ripping in the exact same place - track 5. Since there are no visible scratches on the disc (nor should there be straight out of the package) and the same exact error happened on two different computers, I have to believe this is a manufacturing problem. I don't intend to rip Kareem and Ambush too much (no pun intended) for something that's the fault of the production plant, not them, but as an indie artist quality control needs to be a priority since you have a direct one-to-one relationship with your customer base.

There's a streaming version of their album on Bandcamp, so I was still able to hear tracks 6-12 and complete this review. As you might expect from the title, "Ali Bomaye" is inspired to a degree by the boxer Muhammad Ali and samples from the build to his famous "Rumble in the Jungle" fight in 1974. They are far from the first in hip-hop to reference the historic event, and will certainly not be the last, though they show a wide range of influences throughout the CD. Even where they are patently obvious, they are no less appreciated for their sound. You'd expect "Shut'Em Down" to sample from the famous Public Enemy song of the same name, and it does, but it also mixes that with Gil Scott-Heron's "The Revolution Will Not Be Televised." The result is undoubtedly what they intended - a throwback to the days P.E.'s militant pro-black message dominated the hip-hop landscape. Ali and Ambush are not in it alone though. While Ambush handles the production and Ali handles the majority of vocal duties, he is joined throughout by the likes of Slick Vic on "The Count Down," Khalil Ismail on "No More Trouble," and Poetic on the aforementioned "Shut'Em Down."

It may be "Stares N Whispers" that best reveals what this Balitmore duo is all about. It's got the same kind of soulful R&B sampled background you would expect from an Alchemist track, and Ali uses his pugilistic vocal tone to powerful effect. Like his boxing inspiration, he sticks and moves over the beat, and this is not just a cute way to tie the review together - he makes the fighting references himself on the track. In the song's introduction Ali makes it personal and tells us this is "my story, my genesis" to leave no doubt he's not just telling fictional stories:

"Lost a lot of partners, so why did I even bother?
My momma was single, raisin her kids without they father
But that's the single reason I'm driven to strive harder
'til momma lost her job, then money there's no retention
Places we used to live in, substandard conditions
Angry and pissed then, always in detention
What's middle class, with only a hat and my pot to piss in
Some classes we used to sit in, never felt that we fit in
We was so poor, we couldn't afford to +PAY+ attention
They tried to say that school was for fools when I was comin up
But now these dummies beggin for money cause they don't make enough
[...] Livin out my dreams, until my heart gives out
Was reckless as a youth, punchin bigger bullies in the mouth
One punch knocked him out, was lazy on my momma's couch
'til momma got mad, kicked my crazy ass up our her house"

Ali's defiant and intelligent flow is well met by Ambush's work behind the boards, and makes this team a potent one-two combination. Even though he's been through more than his fair share of drama in Baltimore, Ali is a hopeful emcee not embittered by his experience. "Love In My Heart" expresses his hopes to attract a fine dime, a girl who's not materialistic and "lookin' for the one nigga that's willing to stay committed." He'd undoubtedly be a better choice than your average money flashing emcee. And that's what impresses me about Ali and Ambush the most - the fact they can craft such a quality album in spite of the fact they are clearly working on a shoestring budget. No press kit and no working CD are no impediment to the talents of this B'more tandem shining through.