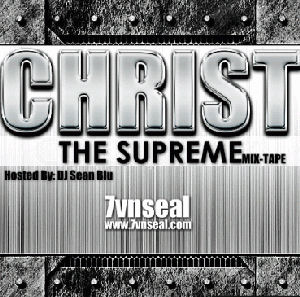 Sometimes you have to get lost before you can be saved. That's certainly the case with Robert Encinas Jr. Before he was Christian rapper 7vnseal, Encinas was a gangster rapper named Vizion, and then a Wu-affiliated rapper named 80proof Tha Illa Instinct. He recorded with Killarmy and signed with Shyeim the Manchild. He was also living a life of sex, drugs, and crime. In 2009, after realizing that his lifestyle was a one-way ticket to prison or worse, Encinas found Jesus. He became a minister, changed his name to 7vnseal and started rapping about Christ. "Christ the Supreme" is his second mixtape in six months, following up on October's "Daggers of Truth" mixtape.

7vnseal's church, the Victory Gospel Chapel in San Antonio, Texas, is all about fighting the devil and preaching the Gospel. The church also has a residential Spiritual Growth Center to help people struggling with "drugs, alcohol, and wayward living" find God. "We are a church on Fire and on the Move," their website claims, "Destroying the devil's kingdom and bringing souls to the Kingdom of God." 7vnseal takes the fighting the devil theme literally in his raps, setting himself up as a soldier battling the forces of darkness. His website has a picture of him in a tank with fighter jets, ready to wage actual war against demons. As he and Pastor L. declare on "Holy Darts:"

"Yo we brave hearted soldiers, son
We stay fatigued
Choose righteousness in Christ and live"

7vnseal may have given up his wicked ways, but he his approach to hip-hop remains the same. He drops hard rhymes over hard beats, only now instead of rapping about sex, drugs and violence, he's rapping about putting the beatdown on Lucifer. His wordplay has much of the same mysticism of the Wu-Tang Clan. He seems to have adapted some of the imagery of the Nation of Gods and Earth and adapted it to Christianity. This makes sense: the Nation of Gods and Earth was a subsect of Islam that appealed specifically to inner city African-Americans, just as 7vnseal's approach to Christianity is geared towards those who have come from rough backgrounds.

The end result is interesting but confounding. As RapReviews writer Grant Jones mentioned in his review of "Daggers of Truth," 7vnseal's message isn't easy to untangle. His rhymes often feel like he's doing standard Wu-inspired raps and just substituting Christian themes for the kung fu and street language of the Wu, often without paying much attention to rhyming or rhythm. As a result, his message can be hard to decifer.

"False Prophets" is a good example of what's good and bad about 7vnseal. The beat is straight from the RZA's playbook circa 1995: heavy, loping drums, a piano loop, and women's voices to round it out. 7vnseal raps with a threatening flow, but what he's saying is hard to follow. The lyrics have a Christian bent, but they aren't that far from the apocolyptic rhymes of Jedi Mind Tricks. They are also all over the place lyrically and in terms of rhyme pattern:

On the surface it sounds like grimey East Coast rap, but when you try to dig into the message it hard to make heads or tails of it. All of the tracks on the album follow the same pattern: raw beats and raw rhymes that sound fierce but don't make a ton of sense. Perhaps because his theological message is not be clear in his lyrics, he lays it out on the last track of this mixtape, testifying for thirteen minutes about his faith.

The problem most Christian rap artists have is that they have the message down but have trouble translating it into compelling music. 7vnseal has the opposite problem: he makes solid underground rap, but has a hard time adapting his Christian message to it. "Christ the Supreme" will probably appeal to former gang bangers and drug dealers who have found God, and who will be able to make more sense of 7vnseal's message.