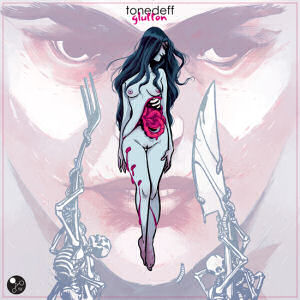 Tonedeff is one of the most talented rappers of the past 10-15 years. Yes this is a very bold statement especially when the average hip hop head has probably never heard of the New York-based emcee. Tonedeff only has one full-length effort to his name (2005's phenomenal "Archetype"), but since 1997 he has released a few EPs, a group album with Extended Famm, and several other projects. Despite his many skill sets, Tone’s career hasn't really jumped off in the way that one would expect, but he shoulders some of the blame for this. In addition to his admittedly slow writing process, he has spent most of his time and efforts pushing his label QN5 and promoting his fellow talented acts such as the CunninLynguists, Pack FM, Mr. SOS and Substantial. But finally last year Tone announced he's going to focus more on himself, and he announced a slew of releases including his long-awaited sophomore album "Polymer."

But last week we didn't receive that project, instead we got a confusing 5-track EP titled "Glutton." If I had one problem with Tone's debut LP, it’s that he tried to do too much on one album. The result, while excellent, was an album that lacked cohesion. With "Polymer" he seems to be focusing on correcting this by combing 4 EPs, all which represent a different style of music, that will piece together for an LP.

"Polymer will consist of 4 separate EPs. Each EP presents a different face or 'molecule' of Tonedeff. Each EP will be denoted by the Polymer icon located on each cover, with a new molecule filled-in for each release. EP's 1 through 3 will be released digitally, with the fourth exclusively available on the final assembled version of the physical collector's edition of Polymer. All music on the project has been produced synthetically to follow along the idea of an actual Polymer's synthetic structure."

With "Glutton" Tone gives fans a very electronic sound, with traces of dubstep and house sprinkled in. Back in 2008, he briefly displayed this style on the "Love Lockdown"-inspired "Warden." With "Glutton" he's mastered putting his own personal twist on EDM. The NumberNin6-produced title track is a full-fledged dubstep track, but with some masterful lyricism, ultra-quick flows and complex rhyme schemes. At around the 3-minute mark, the song has a great breakdown with a sensational melody on the bridge. No matter how electronic the instrumental is, Tone is able to breathe a sense of life into every track with his beautifully layered harmonies. While his production is great (he does three of the five cuts himself) and his singing top-notch, his true talent – rapping – is second to none. Very few emcees can piece together as many rhyming syllables as Tonedeff – only person that really comes to mind in early-era Eminem (as well as Mathers' better moments on "Relapse").

"He was a Casanova...
not really - But his talent sold him
He was crass, but his passion drove up on the curb
When he rapped, it showed - and ladies certainly had to know him
He was trapped in the past and sewn up in a pattern
Holding to his oldest habits as a grown up
To creep, creep, When he was alone he was prone
Just to peep peep, any bit porn he could hold
As a pre-teen, he begins to hoard what is shown
Then extreme scenes, become a resort of his own
As the weeks keep coming, and seeds reap nothing
But the hunger for the hunt of the cheap deed
Brother here would cheat cheat, any single chance that he'd get
His insecurities surpassed the regrets
Yes, it seems there was a deep need for fantasy to match what he'd get
But he couldn't connect and like it was passenger-sex
And since reality, would have him upset, he vowed to keep clean
If he found a sweet thing, he's positive he'd have to reset
'Yo, I'll never cheat again if I tie the knot'
He put a ring on a woman, with a mind to stop
Now every piece of ass that he met with an eye on his cock
He felt like he was passing a test, When denying their shot
But when the times - they got hard - He resigned and dropped guard
And now he lives alone and pays the price for the 'pop'"

Thematically, "Glutton" is buried in sex, drugs, and every other hedonistic lifestyle one could imagine. Content-wise this EP reminds me a lot of The Weeknd and even Danny Brown's last album. The first three tracks get increasingly more dark and depraved until it bottoms out on the aptly-titled "Filthy (XXX)," which features a chorus so dirty, it would make Jenna Jameson blush. But he closes the EP with lighter moments like "Never," which tells the stories of three people whose lives fall apart due to their gluttony, and the EP's finest track "Sunrise," which feels like a hangover after a night of excess.

"Do you wanna live? I wanna remember what it feels like
To be embedded in a real life
When the deal's dicey and it's evident it's another surreal night...
Then I'm f'in to check if the lid on my head is sealed tight
Cause I would give anything to replenish the dream inside
Tethered together by a steal line -
Drawing it's heat from the light, deprived
Reaching for Helio's height's
Leaning without a means to survive, till the ceiling divides
I hid every bit of esteem and concealed it inside -
Cause when you need to feed on it, then it eats you alive
Cause when you believe that you're right and nobody's seeing your side
You tend to agree - I don't need another reason to die
People can turn a blind eye and you've gotta pardon them
When your character flaw is a self-imposed martyrdom
Part of the prob is shock it exists -
It's seen but never felt like a victim describing a shot to a witness
Isn't this just coincidence? The shit's a mess
Missing photosynthesis in this den I'm imprisoned within
It's a sin as I wither away
As if business will give me the pleasure that flickers and fades as I live in this haze
I wanna be riddled with millions of rays on the skin of my face
Till the cinnamon pigment is colored crimson in shade
And I've been in the gray and I'm sick of waiting
And I don't want to wonder anymore if the sun has risen today"

From top-to-bottom, you will be hard-pressed to find something wrong with "Glutton." Yes it's brief, but Tone doesn't spare a single line on the entire project. The only fault I can see with the project, is that maybe it is inaccessible to folks who are not fans of EDM. Personally, I'm not a big fan of the genre, but I think it's done well enough here, along with the magnificent rapping and singing, that it's very listenable. The best part of "Glutton" is that it's not only a great EP that could stand alone as a single piece of music, but it is also easy to see how it will fit as the first part of a bigger project. And "Sunrise" feels like a perfect transitional track into the second EP of "Polymer."