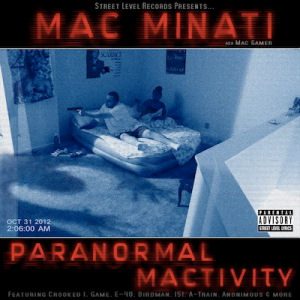 There's a bit of a mystery to Mac Minati, and I'm not just talking about the artist himself. I got this zip file for review late in 2012 and due to the extensive amount of submissions we receive for coverage it got put on the backburner for a bit. Around the same time I received a brief press release from his label offering the album as a free download. The page that the DL was on no longer exists, which happens all of the time, but if you Google ANY combo of "Mac Minati" and "Street Level Records" that leads to the SLR website, you'll get a 404 on the other end. Was there an acrimonious split between the two? Even an album he apparently released just last month returns a "OOPS! NOT FOUND" response too.

Here's what we can tell you about Mac Minati that you can't find on the Street Level website - he used to be known as Mac Gamer, represents for Seattle, and lives in Kings County. "Paranormal Mactivity" has more than the average number of big names for a rapper coming up out of the Pacific Northwest, and some of them from big names - Crooked I and The Game on "New West" for example, built around a hook proclaiming "from Cali to Seattle we keep it crackin." The song hits hard enough for me to bump it more than once, as does "Ain't the Same Kind" featuring Birdman and E-40.

About 40% of Mac Minati's songs are produced by D-Sane, who seems to have his finger on the pulse of Minati's style. He provides a mellow backdrop for Minati to hit a faster Twista-esque flow on "Let's Play," gives a Big B/Kottonmouth grinding bottom to "I'm Broke" featuring TDF's Produk, hits an echoing and spacey backdrop for "Temptations" and arguably achieves his peak on "Love Don't Live Here." The interpolated chorus may have been obvious from the title, but Minati's words still play well with the set-up:

"I can catch a laugh at any time, it's yo' presence I despise
I don't trip off you talkin' shit, it's just motivation for rhymes
Niggaz playin both sides, the last I heard I was a sellout
Made an album .. hit the shelves and it sold out
How ironic, bag up the chronic, bumpin _Slam_ by Onyx
Let the boys b-boys while the strong man stack dollars
I keep my ear to the streets"

If Minati does keep his ear down low he might want to turn those eyes up to this profile on Facebook which was either hacked or is an impostor. Now is this hatred part of the mystery as to why he's no longer with Street Level Records? I'm not here to say, but the people behind it accuse him of a laundry list of credibility issues, and as with everything you see online (Wikipedia, Facebook, et cetera) assuming the truth at face value could be dangerous. Unfortunately for now this is where it ends for me since the official links I had to his album and bio are all broken and other searches for Minati just turn up reviews of this album or the others he has done.

As for the rapper himself, I have to define everything about him other than D-Sane as "fairly average." There's nothing overtly phony about his swag, but nothing terribly memorable about his wordplay or punchlines. He did line up some impressive cameos, but those can't have come cheap, so why give away the album for free? Well DatPiff and Bandcamp give away everything for free in 2013 anyway, so that's your answer to that, but for now Mac Minati will remain something of a mystery.