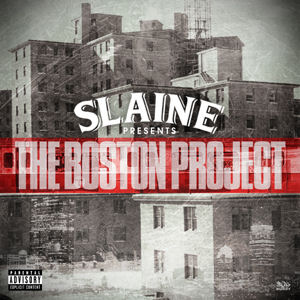 Insiders might have a different view, but from the outside the Boston scene has always seemed a little bit more unique and united than rap scenes in comparable cities. It has maintained its reputation for honest hardcore hip-hop, lyrically forceful and distinctly East Coast in sound and largely indiscriminating when it comes to skin color. At times it has brought forth breakout stars such as Edo.G, Benzino, Mr. Lif or REKS, but nobody reached the standing of the great late Guru, who had to leave his hometown to become a rap legend. Still seasoned followers of rap know that the Bean has been a steady source of highly dedicated and skilled artists. One of them is Slaine, a rugged rhyme slinger who's busy building his own legacy with solo releases as well as his membership in militant supergroup La Coka Nostra.

"The Boston Project" is Slaine's way to honor Boston and the brand of rap music it has inspired. Each track pairs him with one or several partners. The themes and moods vary, but the undertone is exepectedly dark and confrontational. Still this isn't rap that tries to capture your attention with a simple wave of the middle finger. With the autobiographical, one-verse "Evolution of the Kid," the host sets the tone by talking about how music came to him as a means to deal with a reality he describes as "pretty ugly." Throughout the album rappers draw inspiration from that reality. "Rats Maze" tells the unfortunate stories of three women while an Edo sample states that "Boston's a good place to meet bad people." "Zombie Land" combines Slaine with a interesting character named Rite Hook, but whether it's the guest, the theme, or the beat, it inspires one of his well-written, vivid verses:

"What do you do when you're stuck in this fuckin' zombie land
you're only 6 and there's dope bags in your mommy's hand?
She loads a needle up to take her to the promised land
Prior she's in dire straits and searchin' through the garbage can
Half of the people in the neighborhood are (hard of hearin')
They all look tired, noddin' off and got a problem starin'
They must have rashes, always itchy, seen scratchin' faces
There's twin brothers down the street, they got matchin' cases
Maggie always arguin' with the cops and she's smart as them
But after swallowin' Neurontin and Klonopin
it's hard to win an argument
So she forgets what she's sayin' and she lights another Parliament"

The rest of the tracks tend to focus on how such circumstances corrupt the minds of these young men rapping. "It's a miracle I ain't spiritual, the shit that I lived," Lou Armstrong wonders on "Something to Believe In," while Slaine puts his faith in rap to overcome the odds: "If the world's against me / I change the story all around, I'm a MC." Other tracks embrace the dark side more fully, such as "Bad Guy" with Millyz and Smoke Bulga, and "Bloodthirsty" with 357 and Phinelia. Spirits are lifted with cocky offerings like "Nothin' But Business" (with BR of GWOP Gang and V Knuckles of NBS) and "Coke Money Jones" (with Ea$y Money and Chilla Jones). Although its title suggests something else, "The Fuckery Hotel" is straight lyrical hotel room trashing featuring Kali Raps and REKS.

Reflective tracks round off "The Boston Project," some more sober, some less ("Cocaine & Whiskey"). "Polaroid Picture" stands out as the album's smoothest tune, also featuring the only female rapper (Dutch Rebelle) and credited singer (Cyrus DeShield). "Faster Than Time" and "Hero" close the album with more general contemplations on life (and rap), the latter summing up the project's spirit with cameos from two longtime representatives, Jaysaun and Checkmark. For a handful of well-known names you may wait in vain (Krumb Snatcha, Akrobatik, Big Shug, Termanology, Mr. Lif, Virtuoso), but the ever-reliable Esoteric pops up on the track with the longest line-up, "Bible Pages," Twice Thou (of Almighty RSO and Made Men) has a few words to say on the subject of "Loyalty," and Boston's godfather has the stage all to himself on (the somewhat misnomed) "Buildin' With Edo," giving a brilliant performance that recalls the criminally slept-on Edo/Slaine/Jaysaun collaboration Special Teamz.

"The Boston Project" in general is a lyrically and musically dense affair. Slaine makes for a formidable tour guide, relying on his own experience but also knowing that, as he puts it at one point, "I speak for more of us." That he managed to get so many Boston MC's on the same record (over 30) is highly honorable, but the most astonishing thing about "The Boston Project" may just be that one producer is able to provide so many different quality tracks. Lu Balz is his name, and his familiarity with time-tested templates results in a soundtrack that covers a variety of hip-hop terrains competently, from Shady Records-era epic bangers to soul-sparkling underground gems to advances into contemporary acoustics ("Bad Guy," "Back Where I'm From").

In his brief history 'Hip-Hop in the Hub: How Boston Rap Remained Underground', Pacey C. Foster writes: "To tell the story of Boston hip-hop without addressing its underdog status would be to ignore an important identity within the community." Proud and painful, "The Boston Project" celebrates that underdog status without a hint of hating towards the inattentive mainstream. Beantown rap is simply different, and it feels quite okay that way. In Slaine's words: "If there ain't a lotta violence, then I don't feel at home (...) So many demons in my past, I ain't never feel alone."