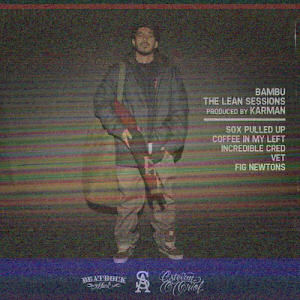 Bambu is one of those dope West coasters who seems to float around from one interesting project to the next, never seeming to land anywhere specific other than the Beatrock imprint. That keeps you hanging on from one album to the next, but it's also a little vexing given it's so hard to have any expectations as to what to expect. Following Beatrock on Twitter or reading our own newsfeed means every now and then I'm caught off guard. "Oh shit! Bambu's done it again." Such is the case here.

"The Lean Sessions EP" is an extension of Bambu's friendship with producer Karman, a high schooler (!) whose talents impressed B enough to have him produce a track on his "... one rifle per family" album. That experience led him to work with him again on this free EP, which serves as a showcase for what both the veteran emcee and the up-and-coming producer can do. It's not an incredibly long release, clocking in at just under 11 minutes long, but that just makes it harder to front on songs that come at you rapid fire like "Coffee in My Left." Bambu describes Karman as "experimental" and that fits like a glove here. He purposefully fades his own instrumental and gives Bambu's vocals an echo midway through the song, as though he was walking away from the studio while still rapping. He interrupts his own beats even when they are loud and clear though - purposefully reversing and stuttering notes yet keeping the tempo. At times following the bumblebee flight can distract you from Bambu's vocals, but he holds it down like a pro:

"While you sign for co-signs, to be popular
Now these thirsty rappers is payin for Twitter followers
Dyin of thirst, dyin of thirst
And Instagram modeling is the fuckin worst! Heh
I'm independent to my socks
While you rap about - how you fin' to make it, homey stoooop"

The warbling beat of "Incredible Cred" seems like it's on the verge of falling apart at any second, but the vocals of Bambu hold the presentation together while he complains that his "faith in rap is getting slim" due to "moguls out here takin every penny that they can" from unsuspecting "underground, barely making rent" emcees. And yet it's because of a "Vet" like Bambu that people who lose hope in rap can find it again, though he's not talking about his own career longevity here. This song is a literal ode to the war veterans who come home from overseas - and those who don't.

The chemistry Karman and Bambu have makes you want to see them explore it further on a full-length album, but who can say if it will happen? Bambu floats from one combo to the next like a butterfly, always stinging like a bee, but never seeming to rest on any one petal for too long. To be honest though Karman's "experimental" beats may just be too much for listeners who just want a heavy bottom beat with a lot of womp, particularly in the West coast scene they come from. For those willing to give this free EP a try though it's a rewarding listen.