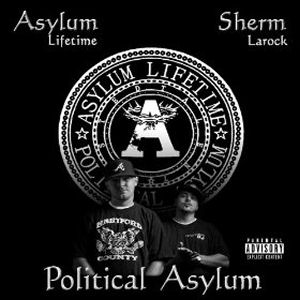 Every year I discover a new act that blows me away with that throwback, boom bap shit that caters to my inner rapper. You know the guy, he tells you to "Woooooo" each time you hear a new DJ Premier beat, or gets the hairs on the back of your neck to stand on edge when you line up Track 15 on "The Infamous". Recently it seems the 90s throwback acts are getting better and better, with the last two years seeing supreme releases from Beneficence, Epidemic, Confidence and IDE. Of course, these artists are firmly rooted in the underground and although their fanbase is relatively small, they don't give a flying you know what. One such record I remember discovering through the joys of Spotify is "Political Asylum". So who exactly are Asylum Lifetime & Sherm Larock? Well Asylum Lifetime is an aggressive emcee from Bristol, Connecticut, a former drug addict who chooses to rap over the hardest beats Sherm Larock can cook up:

"Political Asylum" kicks off with a dope "Intro" whereby Asylum drops some decent rhymes but lets himself down with a horrible attempt at a hook, "We Run Rap" fits the mould of street rap more effectively, a boastful demonstration of how embedded in hip hop culture Asylum and Sherm are. The Jadakiss line "fuck saving hip hop, we're bringing the streets back" sums up "Political Asylum" as good as anything. Asylum Lifetime isn't a great emcee but if you just want some street raps over dope beats, this is one of 2011's better releases. "Rifal" is more of the same, and although you could probably exchange any of Asylum's verses with those on other tracks, there are moments where Asylum lets his guard down to spit something more substantial:

"I'ma do me you do you, let's maintain
Mind on self-destruct I got death on my brain
So many personal demons can't give birth to my fetus
And these girls slurp semen just to murder my demons
I learnt the meaning of this, Earth's under a petri dish
Life under light, eat or cease to exist
It's do or die, you don't do it then die
Ruin your mind…"

"Personal Demons" is as gritty as the "Drag You To Hell" sample from Vinnie Paz that gels the depressive verses from Asylum together as well as anything Vinnie himself has put out. "Time To Build" is effectively Screwball's "Take It There" with superior MCing. Demigodz' latest member Blacastan demonstrates his prowess when matched with similarly nostalgic production, collaborating with his fellow CT residents on "Urban Politics":

Ever since "Blac Sabbath" dropped in the same year as this, Blacastan has always impressed me. He just has one of those voices that grabs you and doesn't let go. It's difficult to mention the Demigodz without their friends Army of the Pharaohs, and "Put It In The Air" is musically the spiritual successor to "Speech Cobras" from Jedi Mind Tricks, a thumping piano-pounder with an irresistible vocal loop. Wasted Talent artist Blak Flag steals the show with his gruff presence adding viciousness in a similar vein to Jus Allah. Essentially it is the Jedi Mind Tricks of 2000 without the scientific bullshit. "Our Songs Bump" comes equipped with Prodigy sample and dope strings, but can't hide the rough flow that Asylum Lifetime hasn't quite yet mastered. Lyrically it isn't the strongest offering from him either, and proves that "Political Asylum" isn't short of flaws. In fact lyrically, Asylum never reaches the same levels of consistency as Sherm Larock does musically, and shows that the pair aren't quite the professionals that the upstarts Rashad & Confidence were two years ago. Nevertheless, "Beast On This" is Sherm Larock's best beat by far, a full-blown neck-shredder that suits Asylum's braggadocio rap perfectly. While "Political Asylum" never gets close to covering political issues or really stretching further than rapping about rapping (a shortcoming of many underground rappers), it is a pleasantly rugged record that deserves to be heard, if only for the raw talent that Sherm Larock clearly possesses.