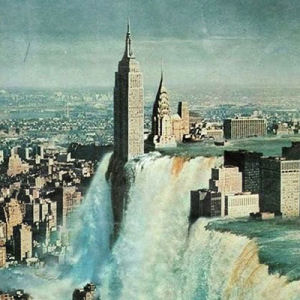 This Blu album was originally called "No York" back when he gave it away for free, but the one word change has only affected the import of the CD to my iTunes library. The tracklist is the same, as is the reputation of the artist himself, once described by RR contributor Mike Baber as "(one of) the most underappreciated emcees in hip-hop over the past five years." He even got a 9 out of 10 for lyrics on his collaboration wih producer Exile for "Below the Heavens," arguably the most famous album of his career to date. He's also ridiculously prolific, having dropped 8 albums in the last 7 years, and that's not counting EP's, mixtapes or albums that he produced. That's right - he's also a producer in his spare time, although considering he's talked about wanting to film three movies one wonders when Blu will EVER have time to spare.

Add or subtract the "No" as you choose, but either way "York" is an interesting and often times bizarre album. Besides being incredibly prolific, Blu is incredibly eclectic, willing to embrace sounds and ideas that other hip-hop artists wouldn't. Perhaps the outro of his song "Hours" explains it best - a debate between him and an unnamed woman who suddenly complains "That doesn't even fit the song!" Blu replies "What is the song?" She responds "I'm still trying to figure it out after fifteen times!" Multiple listens will be required to figure out the material. Take the Flying Lotus produced "Everything's OK" featuring Jack Davey for example. For me it's the hip-hop equivalent of "Space Invaders Infinity Gene," complee with similar video game sound effects.

Occasional songs drift back toward more traditional hip-hop, such as the Samiyam laced "Everybody Nose" featuring Sa-Ra and Nola Darling, but often as not on "York" you'll feel like your brain is the cover art - being washed away in a torrent of liquid sound. I've seen the descriptor "electrohop" attached to Blu's sound on this album, and that would definitely fit songs like the Dibia$e produced "SLNGBNGrs." It's got a beat, but you can't really dance to it. It reminds me of what DOOM would be if he decided to produce records with only computer noises instead of jazz and soul breaks - and that's a compliment to the degree I can compliment it. I don't necessarily hate it, but I could easily understand why a lot of people won't like it.

"Down to Earth" may be the album's most accurately titled song, as Shafiq Husayn pulls Blu away from some of his weirder musical excesses, and he winds up as just one voice amongst the rap team including Definite, Donel Smokes and Dubble Oh. Shafiq is a good influence on Blu in general, although "Spring Winter Summer Fall" and "My Sunshine" drift more toward Blu's eclectic tendencies. I can't deny the creativity of rap songs like "Annie Hall," but it's equally hard to deny that this isn't the kind of song you can bop your head to with the top down as you drive around. Even songs with a heavy bass like the massive all-star track "Doin Somethin" still feel artificial and robotic, which is as Blu intended. I respect the architect, but I can't help but feel that Blu's point will be lost on listeners. Even the song "Tags" with Exile has an alien feel, and it's one of the more normal tracks here. Caution is advised - Blu's brand of hip-hop on this one's not for everybody.