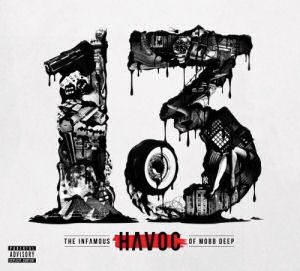 Don't you hate it when your favourite rap duos/groups have disputes amongst themselves? It occurred in varying degrees to EPMD, Public Enemy, NWA, Leaders of the New School (who had a very public dispute on TV's "Yo! MTV Raps," leading to a breakup), to name a few. When I heard about problems between Mobb Deep's Havoc and Prodigy last year (due to Twitter comments of all things), I was pretty shocked as I've been a fan of theirs since the early days. I recall reading a comment online at the time, along the lines of "Hav and P beefing was as uncomfortable as watching your parents fighting", and it did feel like that to me. Whilst they hadn't been setting the world on fire with their more recent work, the glimmer of hope was always there for them to come correct in future releases, and I wasn't too happy to potentially have no more Mobb Deep albums to look forward to. When I learned late last year that both of them had upcoming solo efforts in the works (both albums were initially planned to be released on the same day), I expected those albums to be all out attacks on each other, as per the Havoc track that appeared at the height of the drama, aimed at Prodigy, called "Separated (Real from the Fake)". THANKFULLY, they shook hands and made up in early 2013, putting my Mobb Deep fanboy heart at ease. Regardless of Twitter beef (or stints behind bars for Prodigy), the creative juices kept flowing and Havoc was first out the gate with his 3rd solo album, "13".

In giving his album the title "13", Havoc states that it's actually his lucky number and therefore wanted to bless the album with that luck. Time will tell if it turns out to be a successful release for Hav or not, but his devoted fans should probably consider themselves the lucky ones, as they're getting pretty much what they'd expect from a Havoc product. He reminds us of that awareness of his fans expectations, and also what he's all about, on the opening track (and single) "Gone":

"Yeah, this is what they want, right?
Give 'em what they want, right?
Yeah, yeah, yeah, 13
2013, funny how time flyin'
It ain't a thing changed in regard to the iron
Hit you motherfuckers, go push it to the essence
Hollow-tip slugs that'll pierce through the vests
Anybody could get it, I send a clear message
[...]
They asked me what's good, I tell 'em I can't call it
Plottin' on the law, if I tell you, I might spoil it
Same shit, different toilet, niggas know my resume
Have you bleedin' like a pig outside of Heaven's Gate
QB mafia, La Cosa Nostra
Whole team in the precinct on wanted posters
Already on the run, so don't give a fuck
And we don't like you, fuckin' get rid of ya"

Forever the hood orator, it's no surprise that most of Hav's verses from "13" don't deviate too much from the above sentiments, and his "same shit, different toilet" line can be applied to the majority of lyrics on the album. However, he does briefly move away from taking out his enemies with the steel on the brooding "Already Tomorrow":

"Damn, it's already tomorrow
And she about to have a baby, precious cargo
13 but she started having problems
Now she's 17 about to have it hard yo
Everywhere she goes she feel she being followed by the stress
Didn't have nobody in school to tell her bout sex
No love at home, had to find it when she could
Looking for a father figure, she givin up the goods
Pretty young thing with a self-esteem
Been gone down the drain and long by her dreams
Life turned around 180 degrees
Knocked up, she should be out there getting degrees
But instead she dropped out of High School to carry
Foul part, she don't even know who the baby daddy
Kinda shit you see on Maury Povich
No playin now mom, she's steady approaching"

Even though there hasn't been much evolution thematically for Hav over the course of his 20 year career, his production has shifted in the way he creates the hardcore feel of his music. Back in the day, the darkness in his tracks with Mobb Deep came from the sparse, almost industrial feel to the production (Mobb's "Hell On Earth" album exemplifies this), whereas on "13", Hav leans more towards layered combinations of foreboding piano keys, moody synths and bass loaded beats to create a soundstage which is a touch more cinematic and polished, and less raw and stripped back. This is evident on "Life We Chose", "Colder Days", "Get Busy", "Gettin' Mines" and, well, half the album really. Some of these same tracks also feature somewhat climactic intros where they begin sans drums, with Hav rhyming over the backing music/samples, and then the thumping main beat appears, which grabs you and doesn't let go until the song ends.

"Life We Chose" has Hav proclaiming "my music is the most ominous shit you ever bumped", and whilst it's not the most threatening music I've EVER heard, it's in the ballpark, but only an album like "Hell On Earth" has the ability to turn a lovely, sunny day into a cold, gloomy night as soon as PLAY is pressed. A couple variations in sound do come in the form of the Asian instrumentation and chants in "Hear Dat", and the classic, funky bassline behind "Favourite Rap Stars" takes me back a couple decades, but overall what we get for most of the album is a feeling of the drama and shadows of street life, and it's his most coherent solo album production-wise in that regard. In fact, the bonus track "Can't Sleep", produced by Statik Selektah, might as well have been produced by Hav instead, as it sits right in the pocket of the "13" sound.

Something which is also slightly different here are the guests on the album, as in the past (with a few exceptions) Hav and Prodigy have tended to recruit guests from within their Queensbridge posse. However, Hav has looked elsewhere this time around for his features, favouring current high profile rappers instead of the likes of Big Noyd, Ty Nitty, Un Pacino etc. (and also no appearance from Prodigy, as the album would have been all but completed by the time things calmed down between the two). "Favourite Rap Stars" features a solid verse from Styles P, and a verse from a surprisingly indifferent sounding Raekwon. Hav brings some Dirty South bounce flavour to "Eyes Open" to accommodate Twista, but in doing so alienates himself as he doesn't seem at ease over the beat and lacks the effortless "Runnin' Off at da Mouth" abilities of Twista. Royce Da 5'9" drops a typically impressive verse on "Tell Me to My Face", with sharp lines like "by deploying words like a thesaurus, I've acquired employment". For better or worse, we also get to see that the G-Unit ties remain intact with Lloyd Banks appearing in all his awkward, yet appealing, raspiness on "Life We Chose". Actually, I've always had a soft spot for 50 Cent's wingman, and it wouldn't be a bad thing for Havoc to produce an album for him:

As much as I enjoy "13" and think it's probably his best solo work to date, I would like Havoc to floor me with a knockout album, rather than just leaving me feeling reasonably content. Contentment isn't necessarily a bad thing, particularly if you are like me and tend to prefer your favourite artists to stick to the style that they initially blew you away with, however, if you put Havoc's solo work up against that of Prodigy (and people will), it's pretty clear that Prodigy stretches himself further with the concepts of "Product of the 80's" and "Return of the Mac", and the variety in the first two "H.N.I.C." albums. Even the dreadful ladies' man mess of "H.N.I.C. 3" can be perceived as, ahem, "creative" (or at the least something different to his norm). I just can't help feeling that the next Havoc album is probably going to be another "Havoc by numbers" effort (an album I'd still be likely to dig if that was the case). Maybe he's saving his killer blows for the next Mobb Deep album? We can only hope.