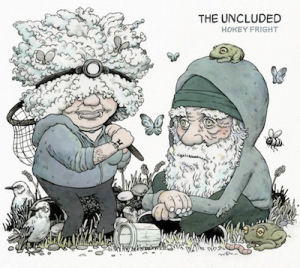 If being strange is something two artists can have in common, and if that's all you need for an excuse to collaborate, then The Uncluded makes perfect sense and should have happened sooner. Aesop Rock has been making unconventional rap music since the second half of the 1990's, who occasionally garners critical acclaim and spins on [adult swim] for work like "None Shall Pass." Kimya Dawson is a folk singer who considers herself to be anti-folk, and while you're wrapping your head around that one, consider that the lone band she was a part of before this one was called The Moldy Peaches. Appetizing? If your tastebuds are in your ears and not your mouth, sure. The one convention they both have in common is being unconvenional.

"Hokey Fright" is definitely folk music to my tastebuds, not that I savor that flavor very often, but there's nothing I find to be "anti" about it unless fans of folk music would get up in arms about collaborating with a rapper. Would they really? I suppose the stereotype I've had of folk music since childhood is people who wear flowers in their hair, who strum guitars and sing songs, who talk about their emotions and protest political injustice at a soft volume in front of large gatherings. They might get up in arms at nuclear arms, but would generally not hurt a fly except by accident. It's an acoustic form in my experience, and "Hokey Fright" has that sound - a recording more "captured" than "produced," although Aesop and Kimya are listed as the producers. Kimya does most of the singing, although at times Aesop sings along on tracks like "Scissorhands," before switching back to his more traditional rapping role:

"There are days I couldn't fight my way
out of a wet paper bag, even if I had Edward Scissorhands
And there are times, I kick and scream and cry
because I'm swept up in a hurricane of shit that's hard to leave behind
This snowball's chances are fantastic..."

As long as we're speaking of stereotypes, and ones which are undoubtedly entirely unfair, "Hokey Fright" sounds like the kind of music you'd hear in a Starbucks and see on sale next to the breakfast pastries and environmentally friendly resuable coffee mugs. And that's not so bad really - I found The Roots' "Wake Up!" at a Starbucks. Much like some of the rapping paired with John Legend might have surprised the latte sippers, the soft melodies of tracks like "Eyeball Soup" disguise some rather dischordant lyrics:

"Sitting bitch, a splitting head
Spinning through the zigging hedge
Back into the primal goop
that spit him on the blinking grid
Sipping on his eyeball soup
A pretty mess of IOU's
Quiet scars, science heart
Tiny parts and giant shoes"

Perhaps this IS anti-folk after all - not many folks songs come off like anthems for the zombie apocalypse, complete with "drinking blood and eating brains/pissing colors free of names." If you were into the hard hitting beats of Aesop and long time friend and collaborator Blockhead on Aesop's previous solo albums, "Hokey Fright" may leave you cold. There are hints of that aggressive noisey post-modern hip-hop on occasion on tracks like "The Aquarium" or "Wyhuom," but pillow soft gentle songs like "Boomerang" and "Kryptonite" are more representative of this CD as a whole. I strongly suspect there Kimya Dawson's fans will more easily accept her collaborating with a rapper as a duo, figuring that she's always been "out there" and for her that's just par for the course. Aesop's fans may be more put off by hearing him become hip-hop's Woody Guthrie. Then again it's Rhymesayers putting this one out, and if they're known for anything, they're known for flipping a finger to the mainstream to do their own thing. This album does that in spades. I'm not even sure I like it, but I do respect that it's exactly the unusual artistic vision these collaborators conceived.