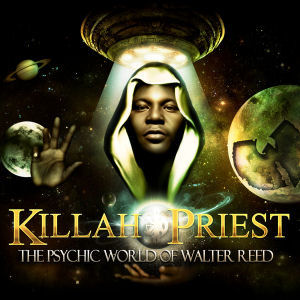 It is easy to forget just how strong Killah Priest's discography really is. "Heavy Mental", "Black August" and "The Offering" were all records this reviewer has spun on the regular, having successfully combined Priest's prophetic delivery with production that was never overly hard-core. The problem with a lot of "prophecy rap" is that either the rhymes go over your head, or the production is so dark that it's difficult to engage with the raps. Admittedly, I've always enjoyed Killah Priest as an artist, as he never overdoes it on the vocabulary (a la Canibus) and usually chooses suitable production. With "The Psychic World of Walter Reed", we are treated to TWO discs of Priest doing what he does best – story driven rhymes with plenty of religious references. There are instances of traditional street rap, "Current Events" being one, but even that is a story where the Priest himself even impersonates a woman.

"Shadow Landz" merges one of Jordan River Banks numerous productions on the record with Killah Priest sounding as hungry as ever:

"My pens the goggle lens, rappers ATV's, hopping over sand dunes of mans dooms
The grip will tell where killer dwells, hides out in Cancun, fucking Spanish women
Tanning in sands his hands is trembling, from rubbing lotion on her
A nude beach, two freaks, she a goner, from street corners, with heat on us
Come horseback riding, with a tyrant who loves whores but acts violent
He lures old women inside tents, gets the knife and slicing, it's trifling"

"Devotion to the Saints" is a standout Wu-Tang Clan combination involving Inspectah Deck and Ghostface Killah, and is just as dope as you'd expect. The real star is Kalisto who provides a grimey beat RZA would be proud of. The Abbot himself produces two tracks, "Energy Work" and "Fire Stone", the former a spaced out "8 Diagrams"-era sound, the latter a disappointing snooze-athon. "Peace God" feels like a drug-fuelled episode from Priest. As a song it is messy and makes about as much sense as the dreams that inspired it, although Ciph Barker provides another pounding backdrop that helps take the edge of the headache you'll induce from the lyrics. At 41 tracks long, Killah's style of rap is hard to digest in one sitting and the low point of the album is "The Spell"; over three minutes of torture rap. Unless you have all the Saw films on DVD and dig Necro, it's skippable stuff. With such a large number of tracks, it's inevitable there will be a few bad eggs, and "Music of the Spheres" features a horrid Jordan River Banks production. Killah Priest tries his best to sound godly over a beat that sounds like it hasn't been assembled to loop correctly.

"The Psychic World of Walter Reed" is decent value for money albeit only likely to appease a niche hip hop crowd. As far as creativity and the ability to hold down over forty tracks goes, Killah Priest has fulfilled his task admirably. The problem with every 2-disc album is there is inevitably going to be filler tracks. Even with an open mind, some may struggle to decipher what the fuck Killah Priest is on about half the time. Thankfully, the production is jam-packed with production mainstays – Ayatollah, RZA and Agallah, but it's the likes of Kalisto and Ciph Barker that supply the better sounds. There is little to ease new listeners in to Killah Priest when he unashamedly raps as if reciting doctrines rather than standard lyrics but as someone that has had the pleasure to see Walter live and having enjoyed his past work, it's clear that he is doing what he loves. For fans of hip hop overall, this is one of his least accessible works, regardless of the fact that production-wise it is surprisingly strong for a 2-disc record.