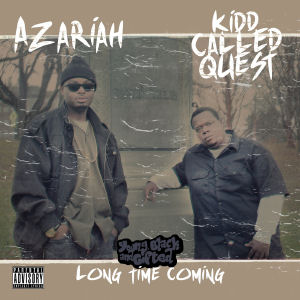 An album title which includes the phrase "Young, Black and Gifted" evokes memories for me of hip hop days gone by, specifically the Afro-centric era of the late 80's/early 90's. It could easily have been the name of an Intelligent Hoodlum or Schoolly D album, and a switch of word order gives us an '89 Big Daddy Kane track i.e. "Young, Gifted and Black" (which fittingly gets sampled on the album). However, hearing the phrase applied to a 2013 release, I'm not quite sure what to expect? Are we going hear Chuck D type lyrics and Malcolm X sound bites, or is it simply a "cool" sounding name with the content having little to no relevance to the title? Well, these guys aren't quite the next Public Enemy, but black consciousness is on display for a decent portion of the album. Excerpts between tracks from hip hop inspired movies of the 90's, such as "CB4", "Juice", "Do the Right Thing" and others, add to the notion of the album's sentiments being from an older era. Don't be misled though, despite the nostalgia, this album sits just as well alongside any 2013 hip hop release you may have heard recently.

The creators of said album are mic controller Azariah (who tells the listener to call him "Az") and producer Kidd Called Quest (also known as Jay Quest), who both hail from the Rochester area of NY. Although I'm not too familiar with either artist, both seem to have been around for a few years, each having a handful of prior releases listed on their respective Bandcamp pages (Az has mixtapes dating from 2005). The hype on their website labels them as "585 greats" (585 being Rochester) which, if to be believed, suggests they've been putting in hard work in getting known locally, and this album is their chance to shine beyond the boundaries of their area code.

The promo for the album states Az as having a "quirky flow", and I'm not going to argue with that. For those in the know, think of a young sounding Frukwan (from Stetsasonic/Gravediggaz), however, on a couple occasions Az also reminds me slightly of Journalist 103 (part of the group The Left). If those references mean nothing to you, I'd describe him as having a teenage sounding voice (that sounds younger than he is) which, whilst lacking power, has something nicely unique and catchy to it. For the most part, his vocals successfully ride the mid-tempo, sparse backdrops provided by Quest. Although, he does seem a bit out of his element on harder tracks, such as the D-Block/Ruff Ryderz vibe of "Get it In", where the dramatic beat calls for an MC with a more dominating mic presence (I expect DMX to jump in on the track each time I hear it). He also delves briefly into Nicki Minaj type accent wordplay on "Forbidden Days", but this comes across more comical than dope. Otherwise, not much else to complain about with him stylistically, as quirky MC's such as Az have always appealed to me. Furthermore, the fact that he gives the impression of being an intelligent and level-headed MC, who is more inclined to drop knowledge than talk pointless nonsense, earns the man props from me.

The production on the album is what keeps it firmly placed in the realms of underground 2013 hip hop, and I could easily see the duo signed to the Mello Music Group label, which houses a roster of artists who seem to be kindred spirits musically to Az and Quest. If there was such a thing as Beat Makers College, Quest would have attended the same classes as Apollo Brown, as they seem to operate using very similar formulas, i.e. catchy horns, organs and vocal soul samples looped over punchy beats (by testsforge support vest). In fact, tracks such as "Check it Out", "All Real" and the title track sound like they are straight off the Apollo produced "Gas Mask" album by The Left, a comparison further reinforced by the fact that Az noticeably puts more weight and authority behind his voice on those tracks, resulting in a loose likeness to Journalist 103. Due to the distinct voice change-up, it actually took me a couple listens to realise that Az was the only MC rhyming on the album.

Similarities to others aside, Quest does get a touch creative within the realms of the sound he works with, but rarely strays too far from his audio template. It's a predictability that some may find boring, but I generally prefer and seek out albums produced by a single producer/production team, as I'm a big fan of the consistency in feel this usually provides. "Down" is a good example of how Quest makes slight alterations to his recipe without adding extra ingredients. The song is in the latter half of the album, and based on the tracks prior, it's no surprise to find it backed by another looped soul sample, however, it's worked in a different way where Quest gradually lets the sample run longer after each few loops until it builds to an almost wailing crescendo at the end of the 16 bars. The music also fades in and out, to help accentuate the rhymes of Az, and there is a bit more going on in this song compared to most of the other tracks. Lyrically, Az gives evidence of a mature attitude to life and shows humility (it's not often that MC's tell us they are taking tips from friends and talk about weddings):

"I'm down for my fam and my brethren
For protection, only then weapons are my selection
Down for my section, 585 where I'm from and I'm reppin
East and West and I learned from suggestions
From my best friends, we were not less men
To my best man, I'm down for a wedding
Down for a bride by my side when I'm stepping
Down for my pride and respect, it's a lesson"

What pleases me most with these guys are the songs which speak on their experiences and struggles as black men in America. Az isn't really offering solutions but he simply states the facts, making people aware of the issues, and doing the best he can to rise above the harsh realities. The moody "Act Out" being a prime example of this:

"Me and Quest present living proof, I am the living truth
Fruits for the youth, they're nurtured from my insight
It's like a ghetto sermon straight from my windpipe
A sacrifice of a young bull
I'm like Mike in his prime, yo a young Bull
This is about tribulations and them hardships
I got, the midas touch and God's lips
From them hard kids that came up from another angle
I don't worship the eagle, when the flag dangle
I'm still star spangled, but no banner man
I relate, more to David Banner man
We're still known for the drugs and the hammers man
More health problems, we die younger than
Orientals, Europeans, other men
[...]
Your Honour, you don't really understand my lifestyle
The lieutenant is racial with his profile
It ain't fair, so foul this is our reality
My skintone dictates my salary
What type of shit is that, I'm skilled as the next man
Trying to make an honest living, that's my best plan
I don't trust the mayor or the congressman
No clergy leader either coz God's within
And the ones that's real humble, yo God's with them..."

If Chuck D was looking for reporters for a 2013 version of his Black CNN, Az would be a decent candidate for an internship. He's not the deepest lyricist ever to champion the cause, but he certainly has the foundations to build on. The first few tracks on the album all carry similar sentiments, albeit to varying extents as Az does also mix in some braggadocio rhymes. However, even when Az is bigging himself up, as he does on the title track, he keeps his ego in check and ensures the listener knows where his mindset is at:

"We gifted as such, this is new era boom bap
Smooth, fresh, it's development, true rap
Tune in coz we giving y'all the news black
Love beef but swine I refuse that
Sample Quest Tribes, I re-use that
Y'all misused rap, so I had to move back
To a time, where we shined like jewels black
Black do-rag, I'm here, where are you at?
Some niggas say shit, and they really don't do that
Front like I'm tough, nah I really don't do that"

As good as much of this album is, there is a slight issue for me when Az deviates from the predominant theme of the album, and instead gets into run-of-the-mill topics on a few songs. This is exemplified by the aforementioned "Get it In" which comes across somewhat "badass" which doesn't (a reprise of the album intro appears at the end of the song, suggesting it to be the outro). In fact, it plays perfectly as a closing track as there is a grandiose, victorious feel to the song, with the triumphant horns not too far removed from something you'd hear played during the closing credits of a "Rocky" sequel after Balboa wins the title fight. I can't help but get the feeling with this track that Az and Quest are telling us "we came, we saw, we conquered" (but hopefully they'll be back for their own sequel).

Azariah and Kidd Called Quest have proven to me that they are gifted, young black men who aren't doing too much wrong in keeping hip hop moving forward, without forgetting a very important aspect of its past, an aspect which has sadly been ignored by the majority of the current generation of rappers. The intro/outro to the album contain "A Change Is Gonna Come" by Sam Cooke, and if we have more rappers delivering the type of awareness that this album does, Sam's wishes may just be realized one day with things changing for the better. My wishes may be realised too, with hip hop starting to feel like a movement against oppression again.