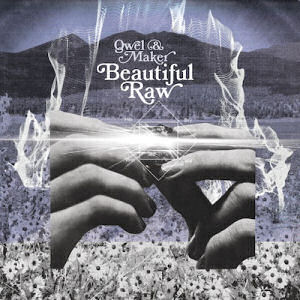 It's a well known fact even our reviewers will admit - Qwel & Maker are stereotyped as hip-hop for nerds. I suppose when your name starts with a Q and you're signed to a label that sounds like a chain of islands, people are going to make unfair assumptions from jump. Can you imagine Galapagos 4 changing their name at this point though? Def Galapagos? Galapagos Jam? Nahhhh kid, it doesn't work, nor does the idea that Qwel should try to conform to some nebulous idea of keeping it real. In fact the point of his whole career has been to be an UN-typical cat who doesn't conform - representing for Chi-Town while simultaneously representing a style and sound all his own.

"This new album is a testimony to the hard work and thoughtful care that the two put into all of their music." - "Beautiful Raw" press release

I come into this review favorably biased toward Qwel & Maker based on past experience, but for those unfamiliar let break it on down. Vocally I think of him as being a Midwestern blend of AZ in vocal tone, Common in accent, and Lyrics Born in his detailed construction. Even though Qwel clearly puts hard work into each and every one of his verses, he seems to toss off his lines effortlessly, with the polished delivery that only an experienced and self-confident emcee can. At times while listening to Qwel I get the feeling that 35 years of rap history culminated in a single moment. I'm not saying he's the perfect emcee - that's going too far - but I will argue that he's one of the best rappers you probably don't know. If you put him in that same conversation as Nas, Jay-Z, Posdnuos, Eminem, et cetera I'd be fine with it. As a non-random example I'd like to quote from "Lake Effect":

"Where tears run the mazes of numb faces
And fears comes and goes stung the stage from the front pages
And tippy toe the slushy street, where the drunk sleeps
The red line stuck in Vietnam and the bum speeches
of rusty beaches in deep water, and one-eyed pigeons
who fight for chicken bones and miss the sunshine thinning
Everybody got they punchlines grinnin, she know a thousand Capones
The C&J don't leave her housing alone"

Admitting there may be a transcription error in there doesn't take away from the grander purpose of the example - it shows the level of narrative detail that Qwel tosses off in a typical (pun intended) song. Rappers often say that they are creating cinematic portraits with their words, but when Q says "heaven's a million miles away from Chicago" on this song it's not just a metaphysical construct. Q can be both proud of his home town and unapologetic about it, making you feel every bit of the grime and grit, noting you "only see the stars" when you're "tipping back the bottle." It's a hard place to be young, black and a dreamer - the entire system seems designed to crush your dreams and trample them underneath. Qwel proves that a flower grows even in the City of Broad Shoulders.

"But here I am, all grown and crummy, good as can gets
Put our praise away, they're waiting on checks
Somethin happen to 'em
and grabbin out of balance calloused faded on deck
Tainted talent of an intellect that ain't got nathin
that ain't got faith and have it all still ain't got nathin
Either bank or pray or put it on stress the broken pendulum
As a child it was all so simple and less literal
I grew up, I got smart, I got cynical
I got math, I got art, I got miniscule fame
Got pride, got pitiful - but as a child it was all so simple…"

Normally I eschew the hyperbole of a press release as worth no more than the salary of the writer (and in the music industry that's probably an intern making less than an opening act on a regional rap tour) but Maker's production is the perfect counterpoint to Qwel's style. The distorted vocals and rusty pianos of "Abracadabra" should sound noisy, but it's amazingly beautiful in concert - like a rap version of what gets called "found art." "Wreck Room" is 180 the other direction - chippy drums, windy sounds, pipe organs and slickness swirled into a cohesive whole. The electric jazz of "Reach for the Sky" is just as pleasing as the loping shuffle of "On One," and the nearly hippie feel good vibe of "Through the Sidewalk" is well met by the somber folk song stylings of "If I Could Sing." It's a trope of my reviews to refer to great combos as Premier & Guru or Pete Rock & CL, and yet Qwel & Maker deserve it because they are that good - and they deserve your attention for the same reason.